What the Robin Heard 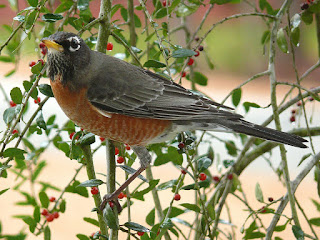 They lay down on a stretch of tended lawn in the shade of the largest oak tree. From up here, their merged shape resembled the hands on a watch dial indicating six o’clock. I looked at the dimming sky then back toward the humans. Uh, huh, that’s about right, I told myself. There’s plenty of time still to hunt for worms and insects. I hopped to a lower branch.

“What will you miss the most?” The female asked.

“The feeling of your ear against mine.” The male answered.

The smell of your hair, the ocean in your eyes, the taste of your lips, the freckles on your breasts, the dip above your pubic hair. The male’s breast heaved. Only a robin could hear what the human didn’t say.

“You know it’s for the best.” The female said.

I heard the silence gurgling in the male’s throat, its heart pounding, its hands shaking. Its fingers grasped the grass and pulled. The green blades cried.

Sluthia called from our maple tree. “Where’s the food? The babies are starving.”

“I’m coming. Just listening to these humans breaking up.” I whistled.

“Breaking up? They look so happy. Well, they looked happy when they first got here. I saw them leaning on each other, holding hands. I loved their singing.”

I darted into the light of the dying sun. The firefly didn’t even see me coming. I landed in the nest, shredded the corpse to pieces and fed the nestlings. I kissed Sluthia. She kissed me back and rubbed her beak on my neck.

“Are you going to leave me too?” I asked.

“If you keep acting like them,” gesturing below, “Maybe I should.”

“Okay, go. But I want you to tell me everything after I put the babies to sleep.”

Sluthia giggled and pushed me off the branch. I dropped to the ground, skipping as close as I dared.

“You’ll be alright, won’t you?” The female asked.

The male shifted its body, lifted its arm and reached for the female’s hair. I was a human arm’s length away.

“I’ll be fine.” The male answered.

“I can’t go on like this any longer. I’m so tired, my heart.” The female said.

My heart? They aren’t local, this pair. I only heard of humans using body parts to call each other in old bird songs. I always thought it was a myth. I couldn’t wait to tell Sluthia. My heart, ha! She’d be thrilled.

The female pulled itself up on its elbows and I flew away. The male didn’t move.

“Be happy, please!” The female said, walking away.

The male nodded, its eyes closed, two teardrops running down its cheeks.

I shadowed the little red car until it came to the stop sign on Parkway. I dived and zoomed past the open window. I saw the female in that instant. I heard it too. Its shoulders shuddering, it sobbed beyond control.
fiction short stories

Gabriela said…
Why a so sad story? Two lovers having to be apart, that's never fair.
10:28 AM

Abufares said…
@Gabriela
When melancholy washes over us we may find comfort in any creative form of expression. I chose to write. I only know of this way to express myself :-)
I hope you're keeping well!
Thank you, always, for dropping by.
3:42 AM