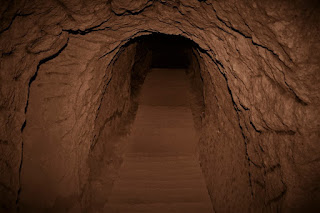 We stand in front of an almost unseeable door, cleverly concealed behind moth-eaten tomes on the last row of bookshelves in the Humanities section. The professor leads the way down a flight of stairs to the mechanical room. Our boots clunk against the gangway as we scurry toward the steam boilers. Under the last one’s chimney, he opens a hatch in the floor. I squeeze through first sliding down a tubular chute. He dispatches the backpack then closes the hatch behind him and jumps. Save for one monolithic door, we find ourselves in the middle of a stark anteroom. Above us, the Pike Library is deep asleep at this hour of the night.

I unpack the gear and arrange it on the floor. The professor takes the can of WD-40 and douses the door’s rusty hinges. While I light the torches, he produces a brass key from the folds of his academic robe. He fearlessly looks me in the eye, yet with a hint of concern he asks.

“Are you sure you want to do this?”

I nod, affirming the inevitable. “Let’s go then. From here on we have to remain silent.”

The flames flicker as a rank draft sneaks through the widening gap of the door redolent of sweat and defecation. I fight the impulse to puke, barely able to repress the bile rising up my throat. The professor looks pale and old, as if twenty years have passed since we left the world above.

We climb down an endlessly twisting stone stairway. Rats squeak beyond the reach of light. The echo of water dripping somewhere reverberates against the sandstone. At the landing, seven shafts radiate in a half-circle like the spokes of a wagon wheel. The professor points to the second one from the right and proceeds. The air becomes heavier as we sink further into the bowels of the campus. A faint humming grows louder deforming and transmuting into orgasmic moans of werehyenas and ghouls.

We emerge into a high-ceiling corridor, flanked on both sides by a dozen massive doors. The professor retrieves a ladder from the shadows and leans it on the crossbar above the door labeled XVII. I climb and peak through the transom window. A proscenium, illuminated by chandeliers, torches and sconces is filled with grotesquely naked figures kneeling on semicircular kneelers and chanting in unison. On the stage, directly below, an old wizard with a belly that hides his genitals and an older witch with drooping, wrinkled breasts utter incantations in an alien tongue.

He pulls at the cuff of my pants. “How many?”

“A hundred-fifty, maybe more.” I answer, coming down.

“Let’s kill as many of the bastards as we can. I’ll get the two fuckheads first.” He says, grinning.

The professor pound-hugs me and ruffles my hair then he unsheathes his sword and I heft my ax, shattering the darkness with shafts of fire. Alea iacta est, we cry as we blast in, blinded with fury, stabbing hearts and crushing skulls.
fiction short stories

Abufares said…
Hola Gabriela
I'm so happy you still take the time to comment on my blog. I'm even happier that despite your aversion to closed, underground places you still managed to somehow appreciate my short story.