All the Light We Cannot See, the Pleasure of Audiobooks

- April 25, 2016
Only recently did I listen to my first book after years of reading. I was fortunate to get a good start. My first novel was The Girl on the Train, a superbly written psychological thriller, by author Paula Hawkins. What made the experience immensely pleasurable was the incredible audio rendition performed by three professional British actresses. I can honestly say that I’ve never heard anything as beautiful before, music included.

After sampling a couple more excellent works of fiction, however, I’ve learned the golden rule of audiobooks selection. The vocal rendition is as important as the written word. From then on, I specifically search for and acquire audiobooks that are as highly regarded for their voice narration as they are for their literary quality.

I'm currently listening to "All the Light We Cannot See", written by Anthony Doerr, and narrated by Zach Appelman. It’s a WWII historical fiction novel and certainly one of the very best I've heard/read in my entire life. The main backdrop of the story is a French city in Brittany called Saint-Malo. Mr. Doerr not only writes with high geohistorical fidelity but on more than one occasion he brought tears to my eyes, when for brief instances, I felt as if he was writing about my Tartous, the one of my childhood (geographically) and the monster it has turned into (historically: since Tartous is similar today to Saint-Malo under German occupation). I've never heard of Saint- Malo before but a few minutes ago I did something I don't usually do until after I finish reading a book. I googled it and saw with my own eyes how it looks like. 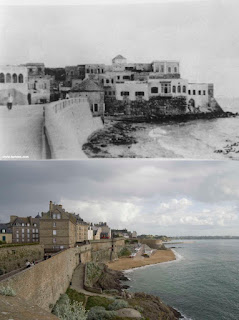 The double picture in this post is of the Tartous of my childhood (upper) and of Saint-Malo today (lower). I don’t call the striking similarity a coincidence for although Brittany lies on the English Channel and not on the Mediterranean the construction of the old city of Tartous was nevertheless influenced by European architecture.

Back to audiobooks, and specifically to All the Light We Cannot See. There comes along a great novel that makes an old, aspiring writer like me feel humble and an older, seasoned reader, again like me, feel as if it was written specifically for him. Anthony Doeer achieved the most daunting task in literature, creating a universal masterpiece with an intimately personal appeal. I won’t even go into a synopsis of the story. I leave that entirely to your curiosity but I’ll wrap this post up with some final words on the performance of Zach Appelman. Despite the Americanized mispronunciation of French proper names, his narration is absolutely breathtaking!!!

Find below two reviews of the book and a short youtube video of the author talking about his 2015 Pulitzer Prize winner.

Doerr’s “stunning sense of physical detail and gorgeous metaphors” (San Francisco Chronicle) are dazzling. Deftly interweaving the lives of Marie-Laure and Werner, he illuminates the ways, against all odds, people try to be good to one another. Ten years in the writing, a National Book Award finalist, All the Light We Cannot See is a magnificent, deeply moving novel from a writer “whose sentences never fail to thrill” (Los Angeles Times).

Gabriela said…
I'd have to try those audiobooks, but at the tie, I think the only way to read is with pages, with paper, feeling the sheets on my fingertips. But, who knows, maybe I'm just talking out of ignorance.
11:04 AM

Abufares said…
I wouldn't call it ignorance, Gabriela. Your, and many others, aversion to mixing technology with reading is totally understandable. However, think about it this way. Stories were told first before they were read. The oral tradition of narration is older than the printed book. From the lips of a good narrator, a good story could turn into a fabulous one. You can close your eyes and immerse yourself in the pleasure of hearing a story the old fashioned way. Or in my case, I can run by the sea and lose myself to words.
Until you give it a try you won't know what you've been missing. I suggest you look for an audio rendition of a novel that is as highly praised as the written version itself. You're in for a wonderful surprise.
11:12 AM