The Boyhood Trilogy - Part 3: Up on a Tree 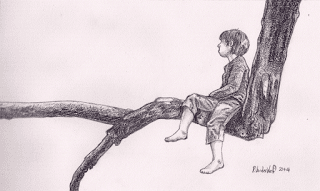 
Spring 1969
At the far side of the playground, a trail wormed its way down to the treeline. From there, the forest blanketed the mountainside, save for some houses on the beach shimmering like wiggling toes. Wary of my scraped elbows and knees, I faltered on the scree bracing myself against the leaning trunks. Forty feet off the trail, I sat on my ass and slid down to my tree. I heaved my body up onto the first branch and grabbed the second. Within a minute, I reached my perch on a sturdy bough. I came here whenever being in a crowd made me lonely and I needed time alone.

Summer 1989
The horizon arched like a picture taken from the edge of space. A dozen vessels, anchored in the bay, pivoted as one with the shifting currents. At the golden hour, a single ship gingerly broke from the pack. Once in the clear, she slow-steamed at first, and then sailed at full speed on a westerly course. I jumped from my tree and swam in her wake, her stern shrinking, the smoke from her chimney waning before she disappeared beyond the end of the world. In her hold, she carried my hopes and dreams in crates and bales.

Fall 2009
In a world I conjured of fantasy, I soared with the birds over the far north until, close to exhaustion, I landed on a tree. The bitter wind swirled the leafs in a frenzy of autumn colors. I fluffed my feathers against the onslaught of the foreign cold and held on to the swaying branch. Out of nowhere, a swallow darted straight at me, almost knocking me off. She pulled out and tweeted to follow. I took a deep breath and joined her on an updraft. We spiraled skyward until, short on air, we clamped claws together and came to a full stall. With our wings entwined, and bills locked in a manic kiss, we fell back to earth in a dizzying spin. When I opened my eyes, she was gone but my irises had turned blue. A skein passed overhead, heading south to warmer grounds. I took off again, and flew the other way.

Winter 20?9
I was woken by the storm. The treehouse creaked with the repercussion of thunder. I folded the futon, fed wood into the stove then I grabbed my chair and danced while the coffee warmed. The rope-ladder, lapping violently against the trunk, brought me out of my solo waltz. As I opened the trapdoor to retrieve it, I heard the fence gate squeal. Transients of all types called on me over the years but none came this deep into winter. I couldn't see the face but I recognized the turquoise scarf. My heart leapt out of its cage and laughed above the fury. I climbed down and ran toward the fence, the snow sizzling under my bare feet.