The double-door opened to a wide corridor flanked on the left by the showers, and by the lavatories on the right. Straight ahead, the custodian's room split the dormitory in mirrored halves of thirty-six beds each. Monsieur Bruno, in charge of maintaining peace, also enforced the Wednesday-and-Sunday-only bathing rule, and made sure no one sneaked into the lavatories at night. For the Marist Brothers, bladder and bowel control was of utmost importance and made us, les petits garçons, better persons, even if we ended up wetting our beds or shitting our pajamas. Tonight, all but seven boys were away for the weekend. The remaining castaways had to wait for Christmas before they could go home.

Without any source of heating until St. Eligius', the nights were getting cold. By then, the nuts of many a boy would have either shriveled or fallen off. Perhaps this was the Brothers' way of propagating and sustaining their ranks. Monsieur Bruno went about his rounds, pointing his flashlight on each of the seven occupied beds across the hall. I closed my eyes shut and stopped breathing until the sloshing of his slippers faded out. Where was I? Yes, Mademoiselle Mireille was teaching me how to kiss. In this exile of boys, perverts and eunuchs, only a rampant imagination kept me going. And a huge crush on my French teacher.

The classroom windows were open to a hazy sky of liquid lead. Inside, the acrid odor of twenty-five pubescent boys was nauseating. A pine tree sighed with an intangibly light breeze, lifting Mademoiselle Mireille's scent above the noisome air. From my front seat, I heard a boy in the back reciting a passage in French. After her usual back and forth pacing, Mademoiselle Mireille stopped and sat on the edge of her desk. I sunk into the chair and rested my cheek on my textbook. Oh, Dear, Sweet Lord! I was rewarded with a clear, unobstructed view or her white panties. In that eternal instant, I crossed the line and became a man three years ahead of puberty. At some point, never measured in real time, she dismounted and grabbed my ear. When she pulled me up, it was too late.

Caught red-faced, I summoned my hands to quickly cover the front of my pants, but she already knew too much. 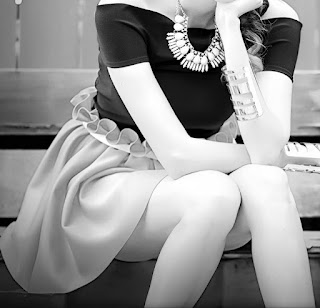 “Don't grow up too fast,” Mademoiselle Mireille said on the final day of boarding school as she pinched my ear for the very last time. Occasionally, over the last eight months, when she couldn't resist my defiant eyes, she'd grant me a fleeting glimpse at a new pair of panties. She had a look especially reserved for me, a half-smile-half-frown sort of expression, that gave me a head-start on understanding women.

Or so I thought!
fiction personal women