- August 17, 2015
… Behold! Your great numbers elated you, but they availed you naught: the land, for all that it is wide, did constrain you, and ye turned back in retreat.
The Quran, Al-Taubah 9:25 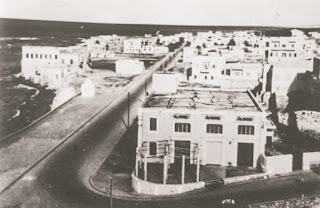 Al-Mina St. Tartous, Syria (circa 1958)
The Threshing Floor is visible in the background, off to the left (behind the single white building)

Men with stooped shoulders walked the streets on their way to make a living. Women ventured out on balconies to dry their laundry on flaccid clotheslines. On the Threshing Floor, kids, out of school for the summer, regrouped and played football again.

Around midday, an army ZIL truck dissected the improvised football pitch and stopped at the center spot. The driver, a brawny sergeant with a walrus mustache, emerged from the cabin and was soon followed by a sad-looking officer with sunken eyes. A whole platoon disembarked from the back with shovels and picks and started digging.

I watched from behind the painted windowpanes deep into the night,  as the silhouettes, illuminated by the truck's headlights, burrowed and disappeared into the ground. They were gone the next morning, leaving behind a long scar on the face of the Threshing Floor, dividing it in two, reducing the pitch to a quarter of its original size. The kids abandoned football and rode their bicycles, bridging the six-foot-wide trench with planks of discarded lumber.

I locked the rear wheel and came to a sweeping stop. Eight or nine boys, squatting or leaning on their bikes, squinted in the glare and waited for me to reappear from behind a cloud of dust. Jumping the trench was the redemption sought after the Threshing Floor was defiled. Except for the buzz of flies and the loud weight of the heat, the space was silent. On the other side of the trench, the shimmering reflections of a million suns danced on the surface of the sea.

Beads of perspiration broke through my eyebrows and coursed around my nose, washing the gound at the corners of my eyes and burning my cracked lips. I wiped my face with the back of my hand before I kicked the pedal on a down-stroke. The bicycle swaggered left and right until it gathered enough momentum to shoot straight. It hit the makeshift setup mound at the exact right spot. As metal and flesh became airborne, I pulled back on the handlebars but the angle of attack was a tad shallow. The front wheel touched down on the other bank a couple of inches too short. The bicycle bucked underneath me like a horse shot dead and catapulted me clear. I landed hard, face first, on a protruding rock on the western side. Blood gushed from a nasty cut in the chin, as painful as the trench.

I took one last, fleeting look out of the taxi's rear window but couldn't see a thing. The Threshing Floor was encased by a high wall. Inside, the trench was filled and the entire ground resurfaced with concrete. Only my scar remained.

Hebe said…
Life is the best story after all. Of curse, I would love to see a "today" picture of the area.
1:22 PM

Abufares said…
@Hebecita
The building in the forefront was called the Casino. It was an indoor/outdoor café with a beautiful view of the sea. It was taken down in the early 80's and its place a grotesque 8 story office building with a Stalinist design was erected.
If we were to take a picture today from the same spot (the minaret of the Baladieh mosque), you won't be able to see anything beyond it. Unfortunately, the whole neighborhood was destroyed, the whole city and not because of the ongoing war that has destroyed and devastated the rest of the country but simply because of negligence and malice by the powers that be and greedy, illiterate developers.
1:50 PM

Gabriela said…
As usual, Abufares, your narration had me waiting to exhale, until I got to the last line. Awesome!
4:03 PM

Ken said…
Part One, a very good read that ended much too soon. Looking forward to read the other installments that are sure to follow. I liked the insight of other people's perspective as to how an event in life played out.
5:00 PM

Abufares said…
@Gabriela
I'm always happy to read your positive feedback. I tried to retrieve frozen bits from the deep vault of my memory and reanimate them. My intention wasn't to create suspense of any kind but I'm glad it worked out the way it did and that you enjoyed it :-)
12:42 AM

Abufares said…
@Ken
This is a 500-words story submitted first to a Writers Group blog called, simply enough "500 Words". Our posts there must be 500 words or less. I was only 7 in 1967. My memories of the war are vague due to its "shortness" and because in Tartous we weren't directly involved. However, the trench was real and it affected my childhood profoundly. This is a fictional story based on real life's events. The line between fiction and reality is so thin, I myself cannot even see it.
Thanks, Ken, for your feedback and support.
12:48 AM

Isobel said…
Hi Abufares. :) I think your best writing is about your hometown. Although I don't totally understand what's going on in the story - I don't get why they dug in the floor. It seemed kind of random. Hopefully it will be revealed in upcoming episodes, which I very much look forward to.
7:36 AM

Abufares said…
@Isobel
Thank you for your encouraging words. I started writing about my hometown and perhaps I should've stuck to that :-) You know what I find incredible? When I reach into the back recesses of my memory and find such a story! I feel like a little boy who has found a treasure trove in an attic.
The fact that you think that you don't understand the random act of the soldiers digging a trench tells me the opposite. As kids, we didn't understand it either. Later we learned that they did it in preparation for the war that was over. The six-day war was so swift, many soldiers in Egypt and Syria literally died with their pants down. We were caught by surprise and on the seventh day, random orders to dig defensive trenches all over the country were issued.
This particular trench faces the sea directly. So you would think that the army was expecting an invasion from the sea. Irony lies in the fact that the trench was never manned by soldiers. It just ruined a perfectly beautiful piece of land and stayed there for 10 years.
Thank you again for your comment. Always my pleasure
7:47 AM