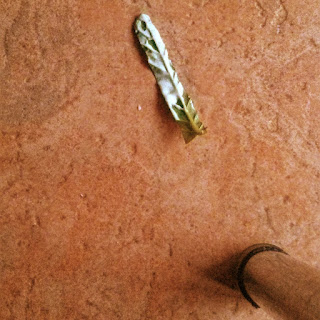 My teeth sunk deep into the soft buns, bursting a medley of juicy flavors. A sliver of lettuce broke free, smearing my chin with mayonnaise, and fell to the floor. I tried reaching down to pick it up but I couldn’t. Michael, sitting across, chewed on his mouthful until it chuted down his esophagus. He took a swig of soda then he coughed and cleared his throat.

“You’re such an obsessive-compulsive old man. Will you just forget about the stupid piece of lettuce and enjoy the damn burger?”

Michael was right, I was frigging old. I nudged the gummy piece of lettuce with my foot, hoping it would stick to the side of my shoe but it didn’t. I stomped it flat. Crap! That only made it worse.

After the third bite, my burger crumbled.

“You’re holding it backward.” He said. “Keep your thumbs underneath the lower bun and the other fingers on top.”

My thumbs disbanded the sandwich as they bore into the bread. The patty slid askew, diced onions fell on the Formica table, and a slice of tomato threatened to follow. Crossed-eyed, I saw a smudge on the tip of my nose.

“Here, use a napkin.” Michael mumbled as he chewed and sipped, ignorant of the fix I was in, or pretending to be.

I looked under the table again then back at him, cloudy, gray eyes imploring.

“I won’t pick it up.” He said. “And neither will you even if you could. Just stop stressing about the goddamn lettuce.”

Michael scoffed what remained of his burger and slurped the last two ounces of his drink. The ice rattled in the paper cup. Gazing at some point above my left shoulder, he frowned as if deep in thought then laughed like a maniac.

Wipe that smirk off your face. I just don’t like making a mess.

“That’s why they hired that Mexican girl. Not because she has a PhD in physics like you have but to clean the floor after sloppy customers. If everyone cleaned after himself or herself, she’d be out of a job. She’s cute, isn’t she? Look at her firm, little butt and perky breasts.”

The girl was beautiful. Twenty, twenty-one. I held her in my eyes.

Only if I were younger, Pretty Thing. You should’ve seen me in my twenties. I had a full mane of dark hair and I was taller, much taller.

“You know why this joint is painted in bright orange?” He asked. "It’s to drive people nuts so they eat and take off.” He answered his own question. “Come on, let’s go.”

Michael helped me to my feet. I grabbed the cane and walked stiffly across the diner. I stole furtive looks at the girl’s butt and breasts. She caught me gawking and smiled at me. I smiled back, almost tripping. Michael held me steady.

“Hey dad, how about some ice cream before I drop you off? We can take the beach road.”

I nodded. I had nothing better to do.
fiction short stories

Isobel said…
Funny story. :) Where on earth would you get a story like that from? ;) It's well written and entertaining as usual. Thank you for sharing.
8:25 AM

Abufares said…
@Isobel
I have a very mischievous (or as we say in Arabic: Mal'ouneh) muse who inspires me to write about the weirdest of things :-)
So nice of you to drop by after my long hiatus from blogging.
3:32 AM

Abufares said…
@Gabriela
You too!!! :-D If it weren't for you and Isobel, I would think everybody left to the cheap gibberish of Facebook.
I had a lot of "personal" matters to deal with over the last couple of months. Oh, nothing drastic, just things that came up and needed taking care of. I'm glad to be back and hopefully I can be more consistent.
3:35 AM