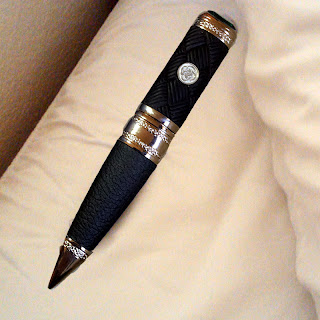 I woke up with a jolt, gasping for air. Where am I? I couldn't tell. Sparks flew, as the burning wood crackled in the fireplace, then hissed and sizzled. I was hot, my skin was burning. I kicked at the covers and took my pajamas off and threw them away.

Never in my life had I set foot in Scotland. Oh, how I longed for the Highlands in an inexplicable, almost salmonlike obsession. There it was, undeniably imbued in my bone marrow, an arduous crossing that would land me there one day. I would hike uphill, across formidable terrain, with rocky peaks and broad precipices, until my lungs would scream for mercy in the confinement of a finite ribcage. I would sit down as close as I dared near the edge of a cliff and breathe the unsullied air.

I heard the tings from afar. The bellwether led the climb, followed by a flock of a hundred sheep. A black and white border collie ran the flanks, keeping a tidy queue along the narrow path. A fair shepherdess of seventeen or so, wearing a dress of white wool, pranced with a gamesome gait until she saw me. She hesitated for a moment, her red hair whirling in the wind like a fire on a lighthouse from centuries past, before she bravely resumed her walk. The collie’s ears perked up. It assumed an undaunted stance and wedged its way between its mistress and me. I slowly rose, took my tam off and in a friendly tone addressed the lass. Latha math, I said in Gaelic. Good day. I had no idea whence the words came from or what they meant until they were uttered.

Latha math, she replied, Co às a tha thu, coigreach? Where are you from, stranger?
I come from a distant land. I think I’m lost.
Dè an t-ainm a th'ort?
Abufares of Tartous
Tha mi toilichte do choinneachadh. She was pleased to meet me. Is mise Fionnaghal. A bheil an t-acras ort?
Hello Fionnaghal. What a beautiful name you have! Yes, I’m hungry indeed.

She signaled for me to follow. Not more than a mile ahead, beyond a bend, we started to descend. By dusk, we reached a village where the smoke rose from the chimneys of houses built of stone. A younger boy, carrying Fionnaghal’s genes, greeted us and took charge of the flock after exchanging a quick word with her. She led the way to a row of single story homes and came to a stop near a quaint blue door. She pushed it open and ushered me in. A big man sat behind a table near the fire. Fionnaghal introduced me to her father. He stood up and met us halfway across the room. He welcomed me with a huge grin on his face and asked me to join him at the table. Once little Dàn corralled the sheep and came in, dinner was served.

We ate Cullen Skink and Haggis, and the old man and myself drank a single malt made in heaven. I entered this house famished and cold, but now I was full and warm. We talked the night away, Fionnaghal’s father instructing me in the history of the Highlands, while I told him of my wounded country. Around midnight, he apologized for having to go to bed. He had to leave early in the morning on an errand. He carried Dàn, who had long fallen asleep, and wished me good night.

Fionnaghal transformed the sofa into a bed and fed more wood to the fire. "This will keep you warm for the night", she said. It was her brother’s turn to take the flock out tomorrow. She’ll prepare coffee and breakfast and pack enough food to carry me through the day. She left the room long enough for me to change into the flannel pajamas her father had brought. The trousers were ridiculously large and I had to hold them around the waist to keep them from falling. She folded my kilt and waistcoat and neatly placed them on a chair. My washed shirt and hoses she hung by the fireplace to dry.

"Where’s your Sgian Dubh?" she asked, alarmed. I admitted that I didn't have one. A Sgian dubh (prounced Skeen Dhu) is a Scottish flat edge knife or dagger worn in the top of the right stocking (hose). It literally translates to black knife (Dubh: black) and (Sgian: knife). In darker, more treacherous times, it was worn concealed under the armpit as a backup and secret weapon, thus the double-meaning of Dubh (black or concealed). I couldn’t but marvel about the fact that Skeen meant Knife in Arabic too. Fionnaghal brought me out of my reverie. "You can’t wander around alone and unarmed", she said, sounding like a worried mother. She went into her room at the back of the house and returned a minute later with a folded silk hankie. From within, she produced a beautiful Sgian Dubh. Standing close, I could smell the earth scent of her hair and skin. I was transfixed by the blue of her eyes and the red of her lips as she tucked me in. "You need to rest for the long walk tomorrow", she whispered. Gently, she lifted the pillow underneath my head and hid the knife there.

Promise you always keep it near you.
Mesmerized by the moment, I did.
She kissed my forehead and lulled me to sleep.

I woke up with a jolt, shivering in a pool of sweat. When am I? I couldn't tell. A feeble glow remained as the last log crumbled and fell dead in the fireplace. I was naked and cold. I desperately fumbled in the darkness underneath my pillow until my fingers came in touch with the familiar shape of the Sgian Dubh. I sighed, then closed my eyes and fell back into a dreamless sleep.
fiction short stories travel women

Gabriela said…
This is exactly the kind of dream we will remember for the rest of our lives. And we will always wonder: was it really a dream?
3:56 PM

Unknown said…
Ach, laddie! I dream of roaming the highlands too. More of daydream than a sleeping dream... My sleeping dreams never make that much sense. Maybe it's from the perspective of a sheep! Lol! Yikes! Anyway, it's lovely to read your writing again after so long. Welcome back. :-)
5:33 PM

Abufares said…
@Gabriela
So good to be back and even better to find you here. Some dreams are indeed too powerful not to be real. The most vivid were some I had when suffering from the effects of a jet lag :-)
2:37 AM

Abufares said…
@Isobel
Hi lass! If I ever write about my nightly variety of senseless (fortunately forgettable)dreams I would be soon committed to the cukoo's nest. There's a fine line between sleep-dreams and day-dreams when one is suffering from insomnia and fatigue. The Sgian Dubh was the fruit of such a union :-)
So happy to see you here!
2:40 AM