- October 11, 2012
It's been over two months since I last strewed words onto this blog; seventy one days to be precise. I had quite an engrossing summer, spending most of which in the United States. While there, I was too busy to get a chance to write. Or, again to be precise, my heart and mind were too distracted to fill the abundant free time I had with an endearing pursuit.

I will write, and soon enough, about my travels across that great land, which has become my adoptive home. You will bear with me, however, the prolonged jet lag I'm suffering from. Since I set foot in Tartous, a week ago, I'm still under the influence, more or less. 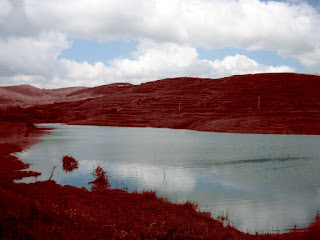 I need to ease my way back into life in the slow lane, for despite the raging fire that is consuming Syria, Tartous remains an oasis of calm. We are either too cowardly or too peaceful in nature, but most likely we are both. My hometown, for the time being, is a stage set in a twilight zone. Yet on the positive side, Tartous has become a harbor, a safe haven for the masses of homeless refugees from all over the country. For those who didn't have the means to get on a plane and escape beyond the sea to start a new life, and for those who couldn't take the insulting inhospitality of our Arab neighbors in Lebanon, Iraq and Jordan, Tartous was and still is the last resort.

It is quite phenomenal for a city's population to quadruple from roughly a hundred thousands to four hundred thousands in a year. Some of us are taking advantage of the situation and charging premium rates for rent and services rendered to our guests. Others have acted humanely, but more significantly honorably, and have been most gracious hosts to those in need, regardless of the schism that had already split the country apart.

To all of my friends who wanted me to stay away from harm's way I can only say that I have unfinished business in Tartous. Most importantly, I have a family that refuses to call anywhere else home. I might be a man torn between two worlds, but for now I'm needed at the helm of a ship that is stranded in a shallow pond in the middle of a scorched wasteland.
personal politics social syria Tartous travel
Location: Tartus‎, Syria

Joseph said…
Now please, stop experimenting with Americanos, and get on with writing and tell us about your adventures and encounters. Jet lag excuses are not acceptable :-).
7:58 AM

Gabriela said…
I always say that home is where your heart is. Let's hope this situation may come to an end soon. And may it result in the best of possible scenarios for your country.
1:21 PM

Unknown said…
What's happening in Syria - and the behaviours, both internal and external - tell us so much about people...the bad and the good. I hope a flood of fresh, clean water lifts your ship to freedom soon, my friend. My thoughts are with you.
1:28 PM

Anonymous said…
Just like my grandmother, she refuses to call anywhere else other than her hometown home. Even amongst war and chaos. Bit of the stubborn quirk you can find in Arabs :P
2:09 PM

Gabriela said…
PD: What do you think of this initiative?
9:01 PM

Abufares said…
@Joseph
I'm glad to be back. Missed writing, missed reading your comments.
Well I was thinking about a coffee post before starting on my American diaries. I need your approval.
12:28 PM

Abufares said…
@Neetu
Absolutely right, kind of a Catch-22 situation really. The important thing is to deal with it as best as we can.
12:31 PM

Abufares said…
@Gabriela
If I follow my heart only I'll be on a different planet, lolll.
Hi Gaby, so nice to see you here. Hopefully there is light at the end of the tunnel or it wouldn't be called a tunnel in the first place.
Every little step counts and what Leila is doing is admirable. I wish her both luck and success.
You be good now!
12:41 PM

Abufares said…
@Isobel
Thank you for your words my dearest friend.
Freedom! Ahhh, what a beautiful scent. It's faint but growing stronger :-)
12:42 PM

Abufares said…
@perfectly.imperfect
Yup, your grandma is so much like my kids. For them, Tartous is the center of the universe. Thank you for dropping by.
12:44 PM

Joseph said…
I am certain we're going to enjoy whatever you come up with. You have my full support, Abufares :-)
2:44 PM

Abufares said…
@Anonymous
Thank you for leaving your comment here. I agree that most Syrians don't believe in violence. It's not a part of our collective identity. There are, however, those (everywhere) who justify getting their own way through the use of force.
I know that the common will shall prevail in the end no matter what it is. "Common" doesn't connote a majority or minority, but rather what will serve the best interest of the country as a whole.
4:05 AM