- June 25, 2012
"I see time as a constant, whereas humans perceive time as flexible. Hence the expression "Time flies" when you're having fun. Which until now has always confused me."
Data in Star Trek: The Next Generation 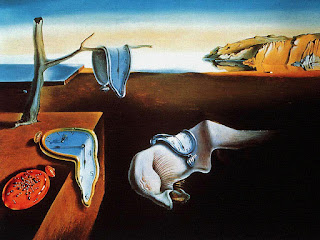 But Data was wrong, time is indeed relative. The faster you go, the slower time moves into the future, physicists tell us, or is it into the past. Recent subatomic experiments have confirmed another tenet of the theory of relativity; gravity alters the flow of time by slowing it down as well. On crossing the event horizon of a black hole, it's postulated, time stands still for the unfortunate, long-dead observer. Only when out in open space, and once freed from the constraints of celestial black holes and terrestrial ass holes does time pick up the tempo and move to a faster beat. As for us, ground-bound earthlings, you may ask any lover if thirty minutes of waiting for a sweetheart at a terminal feels shorter than being with her for a whole week and he'll tell you that it's not so. Time does fly when we're happy and trudges along laboriously when we're not. Certainly, how we focus on time affects our perception of it. If we bring it to the front we'd be agonized by every tick of a clock on the wall. That's what we tend to do when we're bored, distressed or miserable. On the other hand if we relegate it to the background, where it belongs, it all but fades away.

We've been in a state of bedlam for 468 days over here. For millions, this is by far the most excruciatingly painful ordeal they've been through. The passage of a single day for those who lost a limb, or loved ones; those who became jobless, or homeless; those who were jailed, or tortured must have felt infinitely longer than the ennui of Facebookers who are complaining about being deprived of their sheepish good ol' days and the disruption of their nocturnal feeding and frolicking. Only an adept student of civilizations realizes that a tiring and perhaps treacherous road lies ahead; one that is probably longer than the duration of our lifetime, yet shorter than the blink of an eye in the course of history.

A summer storm came from nowhere and drenched the streets, making them desolate of pedestrians and other forms of life. We are holding each other's hand and running for cover under a store awning. For a minute or two we're standing there waiting for the rain to pass. Her mascara is running slightly as I'm holding her in my arms. I'm combing her hair back with my fingers, staring at my reflection in her eyes. She's looking at her own beautiful face in mine. We kiss. Years later, I taste the sweet honey on my lips every time it rains. A minute or two no more, an eternity.

Time, as plenteous as grains of sand on all the beaches out there, is more precious than a gulp of water in the palm of a thirsty man. Our brains have adapted to its scarcity by weaving a cocoon made intricately of the flares of happiness we treasure most. We neatly hide them in the back of our minds, then in a moment of utter need, a moment of craving for a place, a past or a person, we bring them out and feed on seconds as if they were hours and days. “I have measured out my life with coffee spoons”, T. S. Eliot wrote in The Love Song of J Alfred Prufrock. Most critics claim that Prufrock was expressing his disillusionment with society in that statement but I disagree. While he may have been disillusioned indeed, this poem is mostly about the passage of time in a man's life. How a moment of greatness “flicker” while the butt-ends of days and ways linger on with a foul taste and need to be spit out.

I long for a day, yet to come, when I throw away my watch and any reminder of the past, present or future. I want to live one singular moment when nothing else matters anymore. Life is neither short nor long as many believe it to be one way or the other. We just need to unlock its little secret like William Faulkner did. "Only when the clock stops does time come to life."
personal quotes women

KJ said…
I experienced that "timeless" feeling once. We were driving at night between the mountains and the valleys around Safita on the way back from some ruins (we used to do such a trip of exploration every other day during summer), and we stopped by a curve on the road. Engines off, lights killed, sunroof open, and the clouds were low and moving swiftly in the sky. Could hear nothing but the winds and the trees.

I don't know how long we have stayed there, but whenever the concept of "time ceasing to exist" surfaces, that memory leaps forward.
8:26 AM

Gabriela said…
To me, time is a mystery. Someimes it flies, sometimes it just seems stuck.
I once read that our perception of times varies as we gro old. For a 5-year old, a year is the fifth part of his life. For a 40-year old, the same period is a 40th part of his life.
I guess we all long for a day where we can live without the urge of consulting a watch every now and then.
9:39 AM

Isobel said…
Ah, but Abufares, Data is not wrong. He did not say "Time is a constant." He said "I see time as a constant." He was comparing his experience with time as an android to how humans experience it, through emotion. Since he can't experience emotion, he can't feel time as being shorter or longer than it really is. He experiences it digitally...or as a constant. I actually remember this episode (back in 1989) and I'm a huge TNG fan. The crew was affected by a time distortion and, since Data wasn't affected, he was able to save the ship and get it away from the distortion. :)

Anyway, I suppose whether Data is right or wrong is insignificant to the real message of your post. I love those moments, although few and far between, when times seems to cease to exist and the beauty of a moment transcends the limits and expanse of time simultaneously. Too bad for Data he would never know this. I think it's one of the best things to experience as a human.

Well, I think I've taken up enough of your time. Lol! A beautiful and thought-provoking post, as usual, Abufares. Thank you.
11:42 AM

Abufares said…
@KJ
What were you (as in plural) doing ya mal'oun driving at night between the valleys and mountains of Safita?
Did you get out of the car or use the back seat?
So many unanswered questions, you... elusive man.
3:24 AM

Abufares said…
@Gabriela
Well this is another thing about time. A whole decade (from the age of 40 to 50 in my case) disappeared in the blink of an eye. The hours and days may be creeping and slow but years are swallowed up fast as we get older. Oh well, experience does come at a steep price, I guess.
3:30 AM

Abufares said…
@Isobel
From one nerd to another, you and Data were and still are wrong.
He couldn't see Time as constant specifically because he experienced it digitally. Being a measuring instrument, he should've felt the Time Distortion.

Next time we meet at a Star Trek convention we'll discuss it further over an Intergalactic, stale, served-at-room-temperature in a paper cup Schlitz beer. I'll be wearing my Klingon outfit, what about you?
3:38 AM

Isobel said…
Not if future technology eliminates the effects of time distortion on the positronic brain. :)

I think this is a competition to see who's the bigger nerd. Where's Sheldon when you need him?

Abufares said…
@Isobel
You were right. I was wrong and will always be, if you come dressed in that tight silver thingy.
3:46 AM

Highlander said…
I have been feeling this since February 2011. All the best to you and your family Abufares
6:28 AM

Abufares said…
@Highlander
So nice to hear from you. You're ahead on the road paved with pain and loss. May you reach the oasis you aspire to soon. May we stop the time of aberration and move on.
6:24 AM