Showing posts from May, 2012
Show all

Farid Al Atrash was born a prince in the southern Syrian town of Suweyda in 1910 to a Syrian father and a Lebanese mother. At a young age, he immigrated with his family to Egypt, where he became one of the most influential Arab musicians and singers of all times. Upon his request, he was buried in 1974 in Cairo near his sister Asmahan (1912-1944). She, too, was one of the rarest Arab voices, having a far reaching contralto with a blend of "dramatic mezzo-soprano". In case you're interested in the complete biographies of Farid Al Atrash and Asmahan, the net is brimming with information on both. Instead, however, I intend this post as a more intimate companion and a backdrop to the attached Youtube video. After perusing through my profile, a reader once asked what kind of a person lists Farid Al Atrash and Pink Floyd as favorites. They are, he implied, worlds apart and only a music ignoramus would be able to equally appreciate both. His comment, inane as
19 comments
Read more

One year ago I submitted what turned out to be my last job at the office. I was contracted to design a residential building in Tartous around mid March 2011. By April the 20th, all the drawings were completed and in order. The client came in and took delivery of the dossier. We shook hands and hoped for the best. He was my last paying client. Like most Syrians today I'm out of a job. What we're going through, whatever we call it since we can't agree on that, isn't going to be resolved overnight. No one in his right mind can imagine going back to the way we were. As for those who wish we could.., oh well screw them. The thousands who lost their lives, the hundreds of thousands who became homeless and the millions who can't find work are not mere numbers. There's no turning back. No matter how long it'll take, the fat lady is going to sing and there's going to be a huge crowd, the largest this country had ever seen, cheering and partying. What comes
11 comments
Read more

A Letter to My Daughter 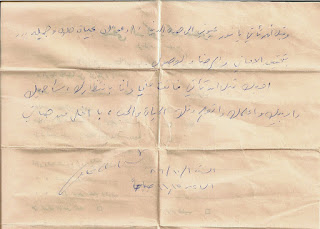 Light of My Eye Although you're not here yet, I wish you a life of enchantment... filled with dreams to chase and destinations to reach. I love you before you're born for you're a part of me. I want to protect, to teach and to learn from you what life and love are all about. You, who are more precious to me than myself. Your Dad, 11:15 am - Saturday, October 1st, 1989 ~Written 10 minutes before Diana was born. Habibati Diana A more traditional man would've waited for his daughter's wedding to write and post his letter to her. But you've just graduated from college, and you know damn well that there's nothing more important to me than this. After five grueling years, of which fifteen months were wrought in anguish every time you traveled back and forth, you're finally a pharmacist. I know more jokes about pharmacists than you care to hear but I should tell you this at least, becoming the father of one gave me wings and lifted me to the top
31 comments
Location: Kalamoon University Syria
Read more
More posts