I've written under the influence before. Here I am though, in this moment in time and in this particular place, waiting for the inevitable. Throughout my life, the journey itself meant more to me than the final destination. On the many twisting roads I followed, the curves, the climbs and the unforeseen stops had marked my passage rather than a Welcome to Utopia sign posted at the entrance of a dead-end street. Sure I remember the cocktail parties and the insidious talks and the obligatory dance every now and then and the banter and laughter and unfinished drinks. The lonely drive back, however, somehow proved more real, more existential, after all these years. 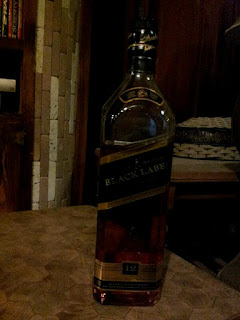 One night when I was young and green, loaded with blood in my alcohol stream someone popped a question. We were playing Truth or Dare and I chose the Truth. There wasn’t a thing in the world I would’ve not done if they dared me so I figured what’s the point! Let them ask, perhaps I can learn a thing or two about myself. “What is your dream?” This is a moment any 22 year old fool would treasure. It was my free ticket to get laid that evening. All I needed was to draw from a vast repertoire of bullshit a young self-proclaimed intellectual possessed and I would end up in the sack with somebody.

“I want to fuck the universe.” I downed the shot of whatever I was drinking and envisioned myself almost 30 years later, now, at this moment, sitting with my friend Johnny, just the two of us, having one hell of a time. His name is Walker, Johnny Walker by the way, and he’s Black my friend.

Well the universe proved to be too lousy a lover and too formidable an adversary. Neither of us remember much of our flirting affair. One thing, however, just one thing, brought me and continues to bring me unbound satisfaction. I never gave up, I never changed. I have less hair on my head to be certain but she too, the universe that is, has grown older with a fat ass. I found myself a small moon and she's much prettier. Screw you Universe, you lost.

I fancy the inevitable, the moment of ultimate truth, and I snicker. I’m past the halfway mark and I don’t give a fuck. After all I’ve seen and learned it could only get better. Cheers!

Gabriela said…
I think that one of the best things we can get from life is living without regrets. Not a single regret.
After reading several of your latest posts, I can tell you've achieved that.
Cheers!
3:30 PM

Isobel said…
Lmao! Oh Abufares! Only you could write something like this through the golden hues of JW! :) I have to admit though, a few cocktails can bring on the most interesting reflections and philosophies. Clearly, you've proved that. Cheers!

@Simon...that's like walking into Cheers and taunting Norm...you're bound to get trampled!
9:27 AM

Abufares said…
@Isobel
Well you might as well give it a try. We don't know what you might come up with, lol, although I have no doubt that you'll do extremely well.
As for Simon, it was senseless of him to leave that comment and I hate that I had to even respond. I'll take both his and my reply off. I don't know why some people really bother being obnoxious.

Thank you for dropping by.
The hangover was BIGGEEHH but I've fully recovered :-)
12:02 PM

BIL said…
Sounds as if you had a good session in reality in life, I know, I've been there. Must say JW in the Black is about as good of a partner as it gets for "a talking partner" but don't stumble over the empty bottle(s). You are right about one thing...when you do reach that final place it is not all what it is said yo be and the journey is really the fun in it all so the destination does not matter. The fun us the people we meet along the way as you sure know by now so I will say Cheers!
The BIL
7:29 PM

Abufares said…
@BIL
You know what? I miss our beer evenings :-) and the talking about various subjects. Hopefully there will be more to come.
Prost!
4:07 AM

Abufares said…
@Lighthouse
Welcome back. It's been a while :-)
I hope that the music and the joy, wrestling inside your soul, always come out even.
Be well!
4:34 AM

Anonymous said…
Gah! Again I forgot my login and password for google... And again I had written something, and trying to login lost all I wrote!!! I think I will stick with the anonymous option here from now on! Yes, I know, my memory is not what it used to be. Yes, I know I'm getting old...

I do remember you at 22 though, and your JW friend. I do not remember the "Truth or Dare" night, so that must have been before we met. (I hope...)

Having a clear conscience is the key for no regrets, like you pointed out to Gabriela. Did JW put you in a nostalgic mood, and then you said screw it?

Anonymous said…
As we say here: "Interpreta mi silencio" LOL do not say another word!!!!

no matter how my inner/outer world is, being into your genuinely kind and adventurous soul is a luxurious refreshment to my soul..

KJ said…
Ah, the wisdom that only comes with age we whippersnappers long to have!

You're inspiring, Abufares — keep up this positive energy in a world that is too conflicted with itself.
1:52 AM

Abufares said…
This comment has been removed by the author.
5:52 AM

Abufares said…
@KJ
Theoretically, the years of wear and tear have given "wisdom" to an old geezer like me and made him "distinguished" from a whippersnapper like you. Nature, on the other hand, conspires against the seasoned man least he becomes a Superman.
Point is, you'd better munch on the fruits of youth while there's still a good bite in your teeth left. Otherwise you'd just turn into a grumpy old man in due time. Look around you, they are everywhere!
6:04 AM