Total Eclipse of the Heart

My plan for the evening was simple enough. Spray some mosquito repellent all over myself, climb to the rooftop with an icebox full of beer then chill out and witness the longest total lunar eclipse in eleven years. Earlier I’ve read somewhere that the astronomical specter would start at 17:24GMT, that’s 8:24PM local (June 15th, 2011). I invited my son Fares to join me but he declined saying that’s he’d rather “watch” it with his friends. Truth of the matter was that he wanted to ride his bike in the neighborhood and the hell with the moon playing magic tricks and his grumpy old man reminiscing over the good old days. In the meantime, it had completely slipped my mind that I was already booked for the evening. I was going out for dinner with a bunch of guys in celebration of a birthday. 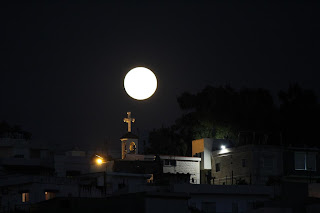 I’m not a fan of maudlin songs, well most of them anyway, but a little after midday Bonnie Tyler knocked on my ear. Bewildered by her sudden appearance I let her in. She grabbed a microphone and started singing Total Eclipse of the Heart inside my head. "Please Bonnie", I begged after the twelfth encore, "enough is enough", but she wouldn’t listen and I had to resign myself to a romantic mood.
Turnaround...
Every now and then I get a little bit lonely,
and you're never coming round... 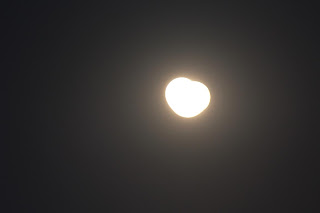 The company of ten “male” friends didn't do much in terms of lessening the effect and absorbing the impact of Bonnie’s tears. Not even the steady stream of Arak, the succulent cutlets of Shish Kabab or the raucous partying could snap me out of my bathetic mood or from Bonnie’s arms.
Turnaround...
Every now and then I get a little bit nervous,
that the best of all the years have gone by...
"You’re too tall for me", I mumbled politely but she kept dancing with me anyway, leading every step of course. And then, in a moment of utter loneliness in the midst of a crowd I looked over my shoulder toward the eastern horizon and saw the moon rising over the hills of Bmalke. Ah, the moon, my Amar... Oh, the eclipse... damn! It’s way past 8:24 but... relax, the show had merely begun. I was glad to have brought my camera along.
And I need you now tonight,
And I need you more than ever,
And if you only hold me tight
We'll be holding on forever,
And we'll only be making it right... 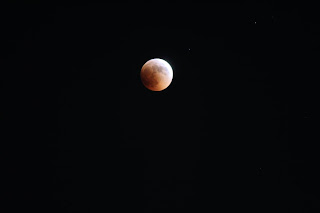 "Stop it Bonnie, I’m already taken, please I’m..." but it was too late. She carried me up two flights of stairs and kicked the rooftop door open. She Turnedaround, dropped me on the floor, ready to jump me when I feebly cried, "look... there behind you, look at the total eclipse of the moon".
I managed to take a few pictures. The passage of earth in between the sun’s rays and the moon lasted over two hours. Eventually the moon vanished completely from the night sky but not before going through an amazing color shift. The heart-shaped moon could’ve been a visual aberration caused by a minute jitter when my finger touched the shutter button but the photo was just perfect for the night. I only brought along a pocket sized tripod which forced me to shoot from less than ideal positions and angles but it was still a very unique experience. Happy Total Eclipse to all of you people out there, may you never have to watch it alone.
Once upon a time I was falling in love
But now I'm only falling apart
There's nothing I can do
A total eclipse of the heart

Email ThisBlogThis!Share to TwitterShare to FacebookShare to Pinterest
at 11:55 AM

You know Abu Fares, my old man used to invite me to his solitary moments too. Ofcourse like your own Fares, there was something more important to do, even if that was to stare at the ceiling in the comfort of my very own solitary.

Sometimes I feel humans live their lives upside down. Wouldn't it be better if we were born with all that "wisdom" and knowledge, and appreciation of these pleasures, and then grew more childish as we went along. The world would've been a far happier place, I think.

We didn't have a total eclipse here. Instead, we had a beautiful full moon, unsually bright.
What does Amar mean? Because in Spanish amar means 'to love', and from your words, the Arabic word has a magic meaning too.

The pictures are amazing! thank you for sharing them. Our moon was big, beautiful and resplendent, but I failed seeing the eclipse go by...

Kul eclipse wa inta bekheir, ya Abufares. With a penchant for ambient memories of yesterday, I would think maudlin lyrics might stir your soul. To my Syrian half, a song with the words and melody like "ya dunia ya gharamy", is moving in a melancholic and haunting way. My western half gets the same affect from Roy Clark's "Yesterday When I Was Young". A lachrymose melody can allow us to indulge our passionate attachment to the immutable memories of our past.

Wow, Abufares! Absolutely gorgeous photos and an enjoyable story to accompany them. I didn't know Bonnie was such an aggressive gal. ;) I wished that we had had that amazing eclipse on our side of the earth too but we weren't so lucky this time. But as Gabriela and Hebe said, the full moon was absolutely resplendent! So much so it actually awoke me from a deep sleep when it's light came in my window.

@Yazan
I've noticed something about our friendship. I make you feel older while you turn me into a kid riding his bike on a downhill course with no brakes but with a huge FUCKITALL grin on his face.
Another dear friend's toast (usually around the 3rd or 4th round): "Cheers! If I knew then what I know now."
It's amazing how much I've grown in the last year alone. It'll only become more confusing as time zips by, unstoppable, uncompromising.

@Gabriela
Well the eclipse started around 18:00GMT or 1:00PM Local time in Lima and that's why you, Hebe and Isobel were not able to see it. But don't worry, you have me on the other side of the planet, right?
Forgetfulness is an early indication of "falling in love", or so they say :-)
Amar means Moon in Arabic and it's a beautiful female name.Remember Amar from Sea Side? ;-)

@Hebé
I like the "é" in your name. It makes you as mysterious and enigmatic as a Bond Girl.
How about the following for an Astronomy 101 explanation of why you didn't see the eclipse.
It started around 1:00PM in Puerto Rico and reached its full extent around 3:00PM. If you extended a line then from the sun toward you then let it come out the other side (Oops, I didn't mean it that way), let it pass through earth and... the moon would've been on the end of that imaginary line, in other words the moon was below your horizon. When I snapped my photos of the eclipse, the red hue and beautiful shadows were created by you, Gabriela and Isobel standing in the way :-)

@William
So nice to see you here. You understand of course that I can't respond to you in the same way I do with the lovely girls, so let's keep it manly shall we? :-)
Ya Dunia Ya Gharamy is as much a masterpiece as Yesterday When I Was Young. Thank you for reminding me of both.
Please come again.

@Isobel
I'm glad you liked my photos. It does prove that there's a dormant narcissist in you :-)
It was Bonnie's hair that freaked me out. I think it was mainly responsible for the lunar eclipse and it made her 10 inches longer. I'm glad she didn't hurt me though nor cause me permanent psychological damage.
When the moonlight finally seeped through your window and fell over your face it was only me opening my window and looking at the distant West.

I followed the link from FB, but didn't realize you were cultivating a female-only following...which is not a bad idea at all, but I would definitely freak out if you responded to me the way you do with the distaff. Good thing I didn't sign in as Wilimina :)

I'll leave you to take good care of the lovely ladies and we can hang out on more manly terrain :))

I've said it before, but not recently, you have a way with words. Keep it coming!

@Bill
Oh no! I'm not cultivating any following at all :-) but you have to admit that the female gender of our species is much softer, prettier, and ;-) smarter.
And one final note, if IRL we get to enjoy the (exclusive) company of women at a ratio of 1/10, that is for every 10 encounters with our hairy and/or bald buddies we are enthralled by women or A woman just once we should consider ourselves very lucky indeed.
Thank you for dropping by. Please do so again.

@simon
Thank you for your kind words and your visit. Much appreciated.

The eclipse was simply spectacular. Your beautiful photos have captured the essence of it perfectly. Too bad we couldn't have enjoyed it together. :) A wonderful post as always, my dear friend.

@Mariyah
I can't wait till the next one to enjoy your company. So eclipse or not... it gotta be soon :-)