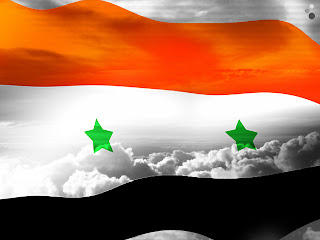 In March of 2009 I wrote on this blog: Live and Let Live in response to what I considered to be the latest bigoted outcry on the Syrian blogosphere against homosexuality. I was convinced that whoever was attacking homosexuals and their basic human rights would not simply stop at that but might eventually assault my own rights as a liberal and a secular humanist to freely express myself. It was the first time I enter into a direct confrontation online with some of those who were on the other side of what I always believed to exist in Syria, a social and intellectual chasm of religiosity. I claimed then, and I still do, that Syrian individuals, families and communities are divided along lines defined by their degree of adherence to religious practices and traditional mores. Later I was candid enough to confess that my champion defense of secularism was possible only because I lived in a country where my liberal stand was tolerated as long as I didn’t dig deep into politics or point my finger in the wrong direction. I never played hero and I admitted that had I been living in Saudi Arabia or Iran I would’ve not dared being so outspoken against institutionalized and organized religion.
We are, however, at a critical point in history. Those whom ideologies and theocratic beliefs I oppose were not and will never be my personal enemies. I say that despite the fact that when they disagreed with me they attacked below the belt. That never stopped me from reading the more adept ones continuously. Although I don’t comment on their blogs I cannot but admit my deep admiration to their insight, foresight and courage during this time of strife.
To them, to all readers of this blog and to every person with the love of Syria running through their arteries and veins I hope for better days ahead when freedom doesn’t mean treason anymore and when the right to dissent is embraced in the same manner the obligation to conform is applauded today. I will continue to blog for the love of Syria. May she rise stronger with our differences. May these differences unite us in a way our similarities were unable to. Souriah w Bass!
politics social syria

Gabriela said…
We all heve to right to have our own ideas. But no one has the right to dismiss another one because they have different ideas.
Tolerance and respect should always prevail, even in disagreement.
10:12 AM

Anonymous said…
Just be careful please! I know your words are true and we all hope that Syria and all Syrians rise stronger, differences and all. But, keep safe!

Isobel said…
Your open mind is always very refreshing, Abufares. Your posts always encouraging to read. I hope that Syria is able to rise above it's differences and come out strong and free. I think Hebe spoke for all of us in her request for you to be careful. We all need you to be safe. All the best to you.
9:27 PM

Abufares said…
@Gabriela
You just said it all my friend.
4:52 AM

Abufares said…
@Hebé
Thank you for looking after me. Don't worry though and let's hope common sense, mercy, compassion and respect prevail.
4:55 AM

Abufares said…
@Isobel
Thank you for your encouragement, support, care and friendship. I wish the best to everyone in the world. Perhaps I'm too much of a dreamer to have any influence on the flow of events. I don't care much to tell you the truth about leaving a mark. What's important is for everyone to live in dignity and content. To be able to go to bed and sleep in peace. To wake up without the burden of poverty or need. To have access to high quality free medical care and education. To speak up their minds without hurting others or being hurt. To be honorable human beings :-)
5:02 AM

Neetu said…
Hi
for sure better days are ahead...and yes the love for syria do run through my arteries through my very dear friends and my friend you too.... apart from the all the difference everyones goal is to aheva peaceful and stable country. :) tc
9:49 AM

Abufares said…
@Neetu
Thank you for your sincere feelings. It's such a pleasure to have you here.
4:01 AM

Karin said…
Diversity in every aspect is a blessing (imagine all of us would think the same way ... how BORING!!) - respecting it, an obligation! Of course does everyone have the right to his or her own opinion and ideas - how can I expect respect from others if I don't respect them to start with? I follow whats happening in Syria on a daily basis and HOPE, this nightmare will be over soon. Differences are normal, expressing them a right everyone must have ... accepting and dealing with them in a peaceful and educated manner a sign of greatness.
From all my heart - I wish your beautiful country to rise from these fires like a Phoenix, stronger, beautiful and free - the Syrian people wholeheartedly deserve that!
1:04 PM

Abufares said…
@Karin
YES! You're absolutely right in every word you wrote.
Thank you for you support now and always :-)
12:38 PM

Ramak said…
Thank you for your wise words. I hope more and more Syrians realize that all Syrians are Syria's children.
12:45 PM

Abufares said…
@Ramak
Syria's children we are indeed. Thank you for dropping by.
6:18 AM