Showing posts from November, 2010
Show all

One month after the autumnal equinox, with hardly any rain but for a wet night or two, the long Syrian summer trudges along on leaden legs. I stand on the top of a mountain in the south of the country and scan the horizon. The thirsty landscape sprawls under my feet bereft of colors save for a hue of dusty brown. The temperature squanders in the mid-twenties, oppressive like a foreign occupier, obnoxious like a distasteful guest. Deep down in the abyss of my genetic memory I cry for Hadad. Hadad is the Syrian God of Thunder, Storms and Rain in the first half of the second millennium B.C. He was Atargatis ’ only escort and considering her status as the Goddess of Syria or Deasura his central role in the Levant is rather simple to deduct. Hadad (Aramaic) is often called Ba’al (which simply means Lord). He is also known as Adad (Akkadian) and Ishkur (Sumerian). Eventually the Old Testament introduced Yahweh , the Lord of Israel, who stole the attributes of Hadad and lesser Syrian d
15 comments
Read more

Get Me Out of Here 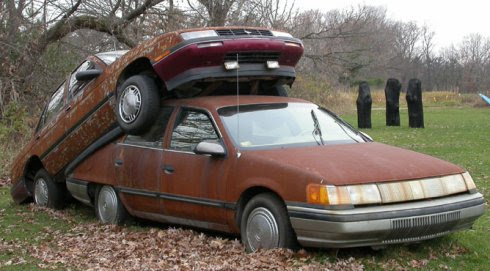 Photo courtesy of Jaguarpedia .org I don't translate bits of news and post them on my blog. However, I felt compelled this morning to do just that after reading this shocking story on Shukumaku . It made me wonder whether we're living in Syria or in Saudi Arabia and whether our police really have nothing better to do. The only positive aspect I could discern (there is really none but I'm trying to keep what crumbles of optimism I have left in my mental grip) is that the vast majority of the commentators on the original piece of journalistic crap were as stunned as I was. The Edleb Criminal Security Branch arrested (Fadi-L) and (Rahaf –G) of Aleppo for having sex in a car. Informed sources indicated to Shukumaku that during a routine security watch a patrol car from the Branch suspected foul play on the Maa'ret Al-No'man - Damascus highway (a KIA Rio parked on the side of the road). Upon field investigation by the members of the patrol they discovered a young man a
10 comments
Read more

On the Tolerance of Religious Societies

- November 10, 2010
I've been asked recently to contribute an article to Two Seas: Forum for Dialogue , an ongoing interchange on Islam Comment website. The topic was addressed by several individuals and I'm very pleased and honored to have made my contribution alongside these fine gentlemen. The question is: Are contemporary Muslim societies tolerant of religious minorities? You can read my colleagues' and my article on the links below. Please leave your comments there on the forum if you have anything to say. All articles      My article
3 comments
Read more 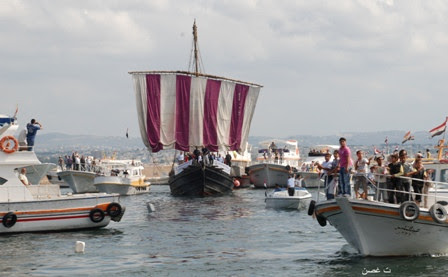 "Wla... We invented the Alphabet, Wla!" Abufares    I stood on my rock by the sea watching the ship getting closer to shore. I evaded the boisterous throng and the pompous dignitaries and floated in my euphoric solitude. On the afternoon of Saturday, October 23rd 2010, Phoenicia returned home. Phoenicia is a faithful replica of the Phoenician vessels that sailed across the Mediterranean and beyond in the 6th century BC. She was conceived and captained by Philip Beale , a former Royal Navy officer based in South Dorset in the UK and built by master shipwright Khalid Hammoud of Arwad, Syria. The ship completed her epic voyage to Arwad then Tartous after covering 20,000 miles in 26 months around the African continent. She set sail from Arwad with a volunteer crew on board in August 2008 to Port Said (Egypt) heading south through the Suez Canal, across the Red Sea to Port Sudan, Yemen, Oman, the Horn of Africa, off the Somali coast (to avoid pirates) all the way to Mayotte
17 comments
Location: Tartus‎, Syria
Read more
More posts