Showing posts from March, 2010
Show all 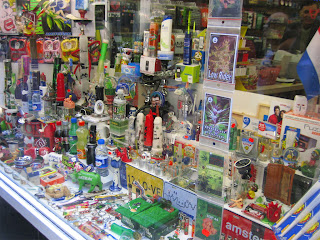 My dearest friend Isobel tagged me in a most attractive way. Her blog sits on the very top of my favorites list. Problem is, she doesn't write often enough, kind of like me. Children have their own ways of distracting their parents and I guess this is the major reason why she's sparse with her posts. Recently though, she's been on a roll. Ever since she discovered that she is the direct descendant of a beautiful Sioux Princess she has become a rather prolific blogger producing one great post after another on an almost daily basis. Among the thousands of her adoring fans I doubt that there is anyone more loyal than me. To read Isobel's Suffonsifisms every day is a perennial dream of mine. I only hope she continues with this pace least I and her groupies suffer from the consequences of a severe withdrawal syndrome. Her tag could not have come at a more opportune time for another reason. Lately, I've been uninspired, plain and simple. I have returned home early
27 comments
Read more 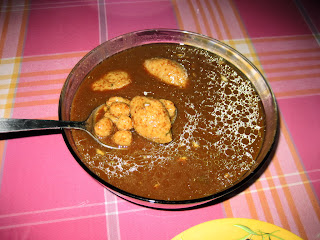 Tartoussi cuisine is inconspicuous, even in Syria that is. Anyone who's been here will tell you that we make out of this world fish but I think seafood is great in all coastal cities around the world. Ignorance about our local entrées though does not necessarily mean that we don't have some of the yummiest dishes in Syria. It's more a testimony of our quiet nature, the writer of this blog not included. We're not loud like the Damascene. We're not vocal like the Aleppine. We are neither funny nor too self-conscious like the Homsis or the Hamwis respectively. We're simple folks who love Mezza, barbequed chicken and Arak . And when we want to be gluttonous we feast on Burghul. Well just to be sure no reader takes this post as an indication of false modesty, no one in Syria, and I repeat no one, even comes close to our Wara Enab (Stuffed Grape Leaves) but that is another story which had already been proven and laid to rest. Today's dish is called Keddab
24 comments
Location: Tartus‎, Syria
Read more 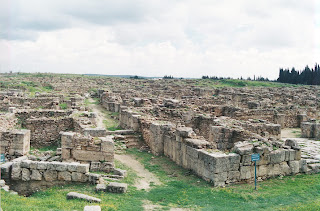 "This song is for you" In 1929 a peasant plowing his field 10 km north of Lattakia (Syria) unearthed a strange looking stone in an area called Ras Shamra. He immediately informed the authorities but little did he or the rest of the world know then about the magnitude of his discovery. French archeologist Claude Frédéric-Armand Schaeffer(1898–1982) spent the rest of his life excavating the site. Ugarit was found. Ugarit was an independent Canaanite kingdom that reigned over the eastern Mediterranean in the 18th century BC (3800 years ago). The Phoenicians, descendants of the Canaanites, built great palaces, temples and shrines in Ugarit between 1450 – 1200 BC. But most importantly they built libraries. They ruled the sea with their strong ships made from the cedars of Lebanon and became the greatest naval power in the Mediterranean and Aegean seas. They traded silver, gold, textiles and ivory with coastal cities, Egypt and Mesopotamia. Ugarit had a population of 10,000
51 comments
Read more
More posts