Once I was young and green I had a one night stand with the city of Copenhagen and this is where my plane landed last week. Twelve hours after I closed my front door in Tartous I found myself sliding the plastic key in the door slot of a hotel room in the center of Copenhagen. She and I acted like total strangers and did not recognize each other at all. I was exhausted as I dragged myself to the shower. I stood there in the corner, my hands touching the dark tiles, my forehead pressed firmly to the wall. Hot water cascaded down my body washing away the dirt and grime but not the craving and longing. I made it to bed, to the welcoming embrace of the white sheets wrapping my body. I gave up in total surrender, I truly needed to sleep.

At exactly midnight the sky over Copenhagen was ripped apart by a succession of explosions. From behind foggy eyes and a blind mind I cussed under my breath. What a fuckin' time and place to start WWIII. I'm gonna die in the arms of a foreign city even before we had a chance to make love. The celebration faded out and the fireworks ended. Locals and strangers left the streets and jumped in beds in pairs or alone. There might've been a few who found solace in an orgy judging from the hyaenic laughter echoing in the night. Why not, enjoy it lads while it lasts. 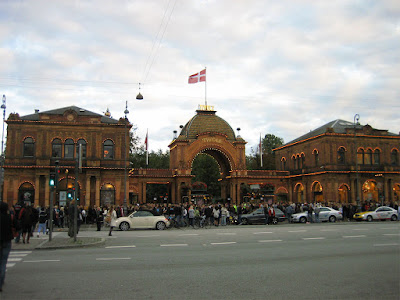 I couldn't sleep! I witnessed the dark of night being slaughtered by daylight and found myself walking at eight o'clock in the morning with the herds of the corporate world. Like cardinals convening to elect a new pope, doors were closed shut behind us for a twelve-hour meeting. Sandwiches were brought in as if they were contraband narcotics. We ate in silence and haste. In between the bottles of soft drinks and water, fresh juices and milk I spotted a solitary bottle of wine. Was it brought in by mistake or did my guardian angel have pity on me. The last five hours went by almost painlessly. I truly needed to drink.

I wasn't the only one in that bad a shape. A few of my comrades felt the same. We joined forces and raided the hotel bar for a nightcap. Little did we know that we would stay there deep in time. So deep in fact I didn't quite see the feasibility of shutting my eyes for an hour or two before the next start of a business day. So I went on, walking the same street as the day before at eight o'clock in the morning, crossing the Tivoli Gardens and climbing the stairs of the historic building, turned convention center. We convened again behind closed doors; Copenhagen on the other side of the window remained a mysterious woman, untouched, unloved by me and by thousands of walking zombies in the world of business.

The day ended just like the previous one. I was giddy from the bottle of white wine I found again and hungry for the food I couldn't touch. The same bunch of desperate men walked the cobble stoned streets seeking a bite and a drink. We found ourselves in MASH, Copenhagen's finest steakhouse where the night was young and a river of Australian wine freely flowed. We satiated our carnivore genes with giant pieces of scrumptious meat and gulped the red intoxicating elixir. The talk was engaging. Who would've thought that a bunch of suits and ties would consume the night with banter about the meaning of life instead of spreadsheets and presentations? Alas, we work like beasts of burden for five days a week to squeeze our lives into an infinitesimal ball of joy and watch it go up in flame on a Saturday. Then like God, we rest on the Seventh, dreading the coming week, and the one behind, then the one after.

Less than two hours into slumber the alarm went off. It's time to down another cup of coffee in the lobby downstairs then to take a taxi to the airport. Twelve hours later I was turning the key in my door lock in Tartous. I let the water washes away the dirt and grime, the craving and longing remained untouchable. I threw myself in bed and lost consciousness. It was raining when I woke up.

“How was Copenhagen,” my kids asked?


During my insomniac time in Copenhagen, I listened to Nights in White Satin. From the distant past (1967), here are the Moody Blues.

Nights in white satin, never reaching the end,
Letters I've written, never meaning to send.
Beauty I'd always missed with these eyes before.
Just what the truth is, I can't say anymore.

Gazing at people, some hand in hand,
Just what I'm going through they can't understand.
Some try to tell me, thoughts they cannot defend,
Just what you want to be, you will be in the end.

Nights in white satin, never reaching the end,
Letters I've written, never meaning to send.
Beauty I've always missed, with these eyes before.
Just what the truth is, I can't say anymore.

Cold hearted orb
That rules the night
Removes the colours
From our sight
Red is gray and
Yellow white
But we decide
Which is right
And
Which is an Illusion
Email ThisBlogThis!Share to TwitterShare to FacebookShare to Pinterest
at 4:35 AM

A good reflection on a business trip we have all had to endure. The thought of being so "Kaputt" just wanting a few hours of rest, then just to find out that the world often ticks to another clock. The only thing we can do (at times) is to succumb to it and join in. Be glad the journey was only a 12 hour ordeal and one time zone. It gets really hard when one is going for 20 hours and 1/2 dozen time zones to adjust to. I think the best part of the experience was the fine steak with the good wine....when do we eat? Sat "Hi" to all (and think of something to say to your kids) Copenhagen is a most wonderful city. Welcome Home!
The New "BIL"

"Alas, we work like beasts of burden for five days a week to squeeze our lives into an infinitesimal ball of joy and watch it go up in flame on a Saturday." So true...

Hopefully next time you'll be able to see and love Copenhagen the way you were longing to.

I always used to envy people travelling on business. I would have given anything just to go somewhere and to see something different. But the seasoned ones would tell me, really, its not that great. You see the inside of a plane or 3, the inside of your hotel room, the inside of a boardroom, and back again. There's just no time for fun. I guess you had one of those trips. It sounded exhausting. Still, its blogs like yours where I go to do a little armchair travelling, and a little bit of Copenhagen is better than none at all. Thank you for a beautiful post. :) Love this song, by the way!

It’s Copenhagen’s loss not to have such a great writer describe her, in that special Abufares way that we love so much. If anything the mystery left behind will only make the next trip sweeter.

@The New "BIL"
So nice to see you here, soon after I posted.
What makes no sense to me in the world of business is the seriousness and solemnity these people insist on displaying, portraying and conveying to each other and to the rest of the world.
No we are not physicians, scientists or engineers but we are professionals. A business suit and a tie make up our uniform. We may be crooks, we may have absolutely no idea what we're taking about when we sit and meet, we might all know that Economics is as scientific as astrology but we need to keep the image.
This is how I really feel BIL, I could never fit in. Yet, for the sake of practicality and making a living, we sometimes have to accept that it might rain bullshit. As long as we have an umbrella... we'll be OK :-)

@Katia
I want to be able to see Copenhagen next time. The way I'm longing to??? Sigh, I really hope so ;-)

@Isobel
Traveling is very much a pleasure.
Still, it's really a state of mind. Sometimes, the inside of a plane or a hotel room provide you with a sense of serenity and beauty beyond anything the whole world has to offer.
In my sleepless nights I'm blessed occasionally to be happier than most.

Nights in White Satin was so perfect.

Thank you for being here, for the light you leave behind after you go away.

@Omar
I don't blush that easy, I'm too suntanned :-)
Thank you my friend for you kind words.
There will be a next time, Copenhagen or not, I always try to get the best out of life. It was a business trip in the full meaning of the word but... they can control my time... my place... never my mind.

the highlight of my business trips is room service and mini bars. not much fun in them at all really, is there?

Once. my brother went to London for some meeting. When he came back, I asked just as your children did: "how was London?", and his answer was: "I wish I could have seen London!"
I was dreaming about Westminster Abbey, the Big Ben, the London Tower et al. He saw London only through a bus and several windows.

@wgaw
You're right. There's not much fun there.
For me, what I enjoy most is when I'm "forced" to stay in for one additional day especially if it's my first time visiting the place. This year, I was lucky with several such business trips. Unfortunately, my tight schedule didn't allow me to be "forced" to stay more in Copenhagen.

@Gabriela
I can't say that I didn't enjoy my last visit to London.
Dr. Fenella was there, remember;-)

Even through your writing, Abu fares, it's obvious that you haven't been to Copenhagen, but to conference room in Copenhagen.

It's still better than being in a conference room elsewhere, I guess?

I like all the Nordic states, one of the most liberal regions in the world.

@Ab
The Moody Blues is one of the greatest bands ever and this song is a timeless classic.
Thank you for dropping by.

@DJ
You know what's funny. I remember a distant exchange we had about our preferred types. Back then, we had different tastes although mine was more encompassing. As a matter of fact I've been accused to "like" anything that moves, looool.
Now, as I grow older and wiser I find myself agreeing more and more (if not totally:-) with your own choice.
Let's keep it between us, OK!!!
Thanks DJ, always nice to have you here.

Abufares I hate traveling for bussiness,especially when it take 12 howers, I do it some times, as the time passes I´m avoiding to travel except for fishing, i can go fishing or hunting eaven everyday, that´s how the grand father of my grandfather did from 1830 to 1870, it is all writen in
(akhbar halab)the diary of halad, writen by (NAUM BAKHASH)
LÊ

Oh yes, I remember Dr. Fenella.
;)
I forgot to mention: I don't like fireworks either! In fact, I completely dislike them.