After a full week of wind and rain, Friday morning broke out clear and warm at last. The thermometer on the balcony by the kitchen showed 19ºC. The sky was pristine, with plumes of rare clouds splashed sparingly around its turquoise canvas. I didn’t want to miss this singular February opportunity and I hurriedly showered but did not shave. I put on a fresh pair of jeans, a comfortable sweatshirt and an old familiar baseball cap. Within minutes I was looking at the cityscape through my rearview mirror. 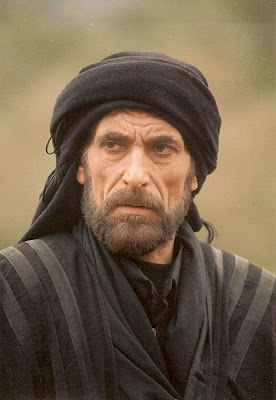 Tartous was still asleep on this brilliant day. I was heading due east on the quaint road to Dreikish. I swiftly eyeballed the rudimentary map and estimated the distance to my final destination at 45, 46 km perhaps, significantly less than the 65 km indicated on one of the websites I’ve earlier browsed. 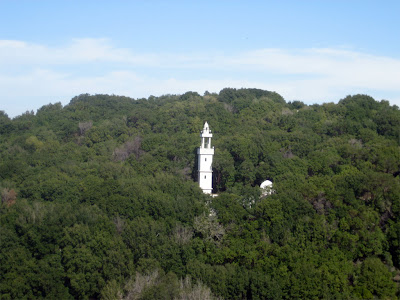 On the road to Dreikish - A mosque in the woods

When I finally got a chance to watch Kingdom of Heaven by Ridley Scott on DVD and in addition to enjoying this historically accurate movie tremendously, I became fascinated with the actor who played Salah El-Din, our own Tartoussi, Ghassan Massoud. I only knew by chance that he was born and that he grew up in a small village by the name of Fijleet. Among my springtime motorcycle jaunts I must’ve ridden through Fijleet at least once in the past but I couldn’t quite remember when. Reading the affectionate words Ghassan used to describe his village made me itch to go there. 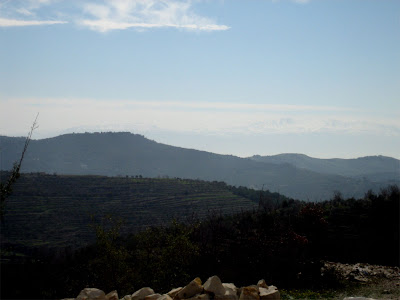 Upon reaching Dreikish (elev. 500 m) and near the first intersection in town I stopped and asked a bystander for instructions. “You should go to the left there”, he pointed, “I’m going to Jnaynet Reslan and it’s on the way to Fijleet. I can ride along with you and show you the way if you don’t mind.” Of course I didn’t. The man was young, in his mid twenties perhaps. He taught at the local elementary school and thought that he would most certainly die if he ever left this country and moved anywhere else. “On Fridays, I trek these hills between the olive trees. I walked to Dreikish early this morning, bought a few things and was waiting for a microbus to get back to the Jnaynet until you showed up”, he confessed. “But tell me. Whom do you want to see in Fijleet?”, he asked. 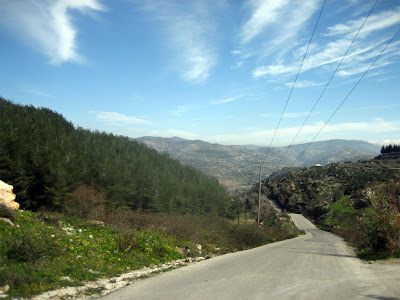 The road climbed and winded

I told him that I was driving by and taking pictures and didn’t know anyone from around this area. He volunteered to take my picture with some beautiful scenery in the background and I gladly accepted. Once we reached his village he offered his natural hospitality and begged me to have lunch with him and his mother. I apologized reluctantly although I would’ve loved to take him up on his offer. When I left home earlier everyone was still in bed. I wanted to return on time to have a light lunch then go to the football game at the municipal stadium with Fares. Our local team Al-Sahel (The Coast) was playing at home against Ariha. They are doing very well in the 2nd division and might, just might, make it to the top level next season. Samir finally accepted my excuse as I promised to visit him on my next trip to his village. 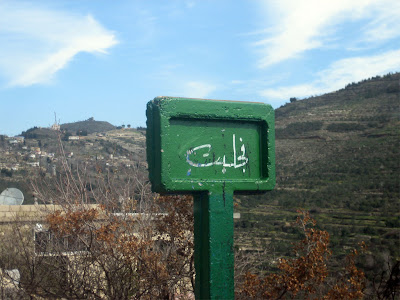 The road ahead climbed and winded, knifing the endless hills with love and care. Off in the distance to the south the Lebanese Cedar Mountains shaped the jagged horizon. Up in front evergreen summits loomed closer and closer until I finally reached Fijleet (estimated elev 750 m). I parked my car by the side of the road and descended to see, smell, hear, touch, feel and breathe her timeless and regnant beauty. 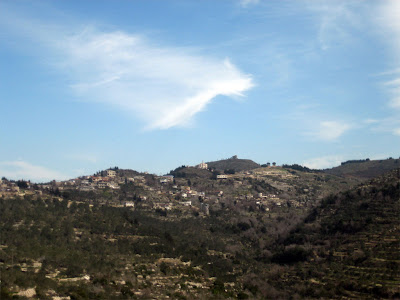 Fijleet- Looking from the West

I cruised slowly through the narrow roads of the village, shot a few photos and basked in the sunshine. I contemplated the connection between Fijleet and Hollywood. Ghassan Massoud rose to stardom and international fame through his roles in Kingdom of Heaven (2005) and Pirates of the Caribbean: At World’s End (2007). He gained my respect and admiration for the heartfelt words of reverence and affection he bestowed on his native land. 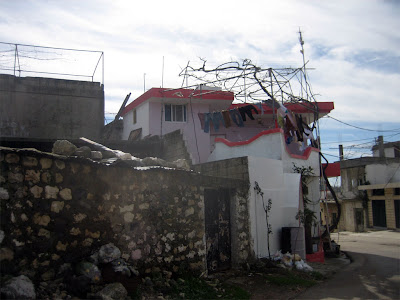 There’s no adobe like home wherever that might be. It is indeed a state of mind to call a place home and some of us might be fortunate enough to have more than one. As long as there’s a locus for us where we can walk in the pitch black of darkness and not stumble, we’re going to be fine. We can do that in our own backyard or somewhere, in the company of someone, whom we can fully trust to take our hand and show us the way. 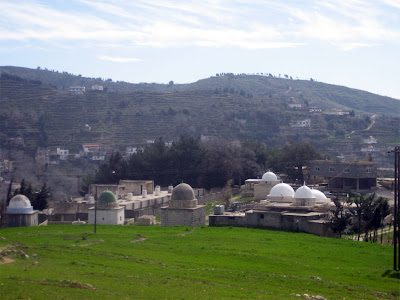 Fijleet as seen from the East

Driving Instructions: From Tartous take the road to Dreikish, 30 km. Once in Dreikish and at the first roundabout, go left (North) then continue to Jnaynet Reslan 10 km ahead. Maintain the main road for 6 km to Fijleet. There are signs in Arabic along the way and you can always ask.
Email ThisBlogThis!Share to TwitterShare to FacebookShare to Pinterest
at 1:04 PM

For a couple of years before I finally made it home, I enjoyed your descriptions of the coastal Syrian mountains. It reminded me of my early childhood memories. I thought my memories were embellished. I was wrong, these mountains are just as I remembered them, beautiful!

ya zalameh, wallah 7anneit, I would love to go to Syria in spring. Imagine I haven't seen her at that time of the year! I've seen all her seasons but the most beautiful!

@Abu Kareem
I'm glad you had the chance this year to see how beautiful this land really is.

@KJ
Believe me once you cross the city limit (on the coast) it is heaven all around. Still, you should make it in the spring.

Abu Fares! What a stunning landscape! Wow! I can just imagine all of those little villages tucked away in the mountainside - little gems just waiting to be discovered. Home does always hold a special place in our hearts, even if we rarely get a chance to go back. Thank you for a wonderful post...again! Isobel

I love when you take us on class trips! :)

Now I shall go to sleep and wind down through the winded road you climbed up Abufares... see, smell, hear, touch, feel and breathe the very same timeless and regnant beauty...Good night.

The picture of the minaret rising from the midst of the trees is wonderful. I love it when you get bitten by the explorer bug, Abu Fares. You get up and go, no fuss, no extensive preparations. Its great fun to go along for the ride wherever you happen to end up. Pity there wasn’t a food part to this trip, though, as I expect it would have been truly delicious!

@Diana
Get in line kids. We need to take a headcount ;-)

@JGM
Well sweet dreams my friend. There's no land like this land.

@Isobel
This is a trip you would have enjoyed for sure.
As you've pointed out, the small villages of the Mediterranean are magical places. They are so alike around this big pond of ours yet each holds its own unique allure and charm.

@Lujayn
When Samir invited me to stay over for lunch he also told me that his mom will barbecue some chicken for us along with a basic Mezza. Nothing fancy he promised.
I had to say no but my stomach was punching my heart incessantly and cussing me with obscene words.
I promise to make it up to you (and to myself) on my next outing. I haven't had a Fellahi Chicken in quite a while.
I'll drink your toast.

@Lujayn
BTW the minaret intrigued me as well. I've been on this road a hundred times before. It's the first time I notice that this mosque looks inaccessible. There is a hidden path for sure and I'm going to find it out.

you know something Abufares... it's been a while since I read something that actually brought the real sense of a home.

I wanna drive to Tartous as soon as possible and have coffee with you and a chat.
cheers!

Abufares, my guru of intelectual affairs,

@Dania
I'm glad I was able to bring to the surface your sense of home.
I will be happier yet if you make good on your word and come for that cup of coffee and chat with me. We can sit by the sea or on top of a mountain. In either case I'm certain that I will enjoy your company:-)

@lê
Thanks for being my guru as far as the Brazilian wildlife and the Syria of bygone days are concerned.
I always enjoy learning about your outdoors adventures.

It's always such a joy to travel vicariously with you! Thanks.

@Shannon
Always a pleasure to see you here. May be someday you'll get a chance to travel these back roads I keep talking about. Then you would realize that I couldn't do them any justice. But you most certainly know that I keep trying.

Abu Fares,
Stunning scenery indeed. And your description has certainly done it justice. Was the winding road in the fourth photo really climbing up? I swear it looks as if it’s descending down! This is one of nature’s beauties; you can never tell what’s around the next curve.

Ghassan Masood is an authentic syrian actor, unlike the new wave of young faggots (excuse my language) with their jelled and cropped hairs and shaven faces. And by the way he also starred in Valley of Wolves, Iraq. Which is considered the biggest Turkish cinematic production in history.

@Dubai Jazz
I should've been more specific:
The road climbed up and down and winded left and right :-)
Kingdom of Heaven is the only Ghassan Massoud appearance I've watched and I have to give him this: he is a very good actor and he played Salah El-Din role with ease and made the character so real and credible.

Linked.
Beautiful country...
I "borrowed" a photo: If you object I will remove it.

@boinky
Not at all. Be my guest.