In the waning heat of summer, thirteen friends coveted a reunion before time and space disperse them again into the four corners of the world. Real Tartoussis, hard working men of different pursuits, driven by the same ambition that impelled their Phoenician ancestors to go out and see the world, were to meet. A dinner table was chosen in a deep valley buried somewhere between the mountains of Tartous.

It was my turn to host. I was asked to make it memorable. Some of them I will not see in years, leaving country and kin and heading out to Martinique, to the China Sea, to the Persian Gulf, to Italy, to unknown wharfs and beyond. What we all had in common, in addition to a life binding friendship, is our eternal love for Tartous.

"Something they shall never forget, that’s what they asked for, when I proposed the invitation."

The first time I had head was, of all places, in Champaign-Urbana, Illinois at a Greek restaurant called the Parthenon. That was a long time ago, when I was a wanderer still, before I made it back to harbor. Having head is just my way of playing with words to make them gentler, although a little naughtier. I need to prepare some readers to what’s coming next, mildly and without coercion. Although eating the head of a butchered animal is ordinary and considered a delicacy in many countries, I had my first chance to try it out in America. It was fantastic and delicious. The Greeks have one of the finest cuisines in the world. I always found their entrées exceptionally scrumptious. They are familiar yet with a twist. The familiarity comes from our being neighbors sharing the same sea and sun. The twist comes from the subtleties of customs and pedigree. 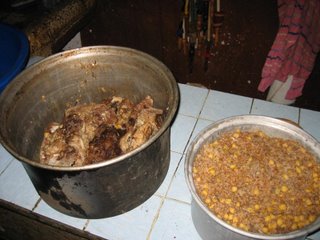 I had to enlist the help of a gifted glutton, a dear friend and an invited guest for the evening. “How many sheep heads do we need to feed all of us?” I asked, “I want to surprise them all with heads.” Without hesitation, without giving it a second thought, he said: “We need one head only. It will sure surprise them as hell. We need one bull’s head.” It was early morning yet; he hung up the phone telling me to leave it to him. He will take care of it. He sure did, and a couple of hours later he called again. The head was gorgeous, he assured me. It was already skinned and cleaned. The meat weighs only 6 kg after the process. So, and in prudent maneuver on his part, he went ahead and bought an additional tongue weighing 2 kg. He reckoned that 8 kg (~18 lbs.) of meat, cooked in a big pot of Burghul and Hommos should be just about right for thirteen hungry lads. “Of course”, he continued, “you should order a full Mezza. We don’t want unbuckled belts at the end. A bucket of plain yogurt, a couple of watermelons and some sweet Herisseh should be just about right." And right he was.

The meat had to be sent soonest to the village for the lengthy cooking process required. I called the chef in the valley where the banquet was to take place. A strike of luck, he was in Tartous buying provisions for his little restaurant in the middle of nowhere. Thank God for mobile phones. We held a 3-way conference, the chef, the glutton and me. We spoke in code, and I set up the meeting for them. The chef’s pickup was approaching from the north in one of the narrower streets of Tartous. My friend’s taxi intercepted from the south. With discretion and efficiency the drop was made. Few words uttered over the wireless network. We shall be there at 2100 hour. We want the whole place. Close the restaurant down at 2030. Hang the “Reserved" sign on the outer door and carry out what’s need to be done.

Our dinner wasn’t over before midnight. The meat was cooked over firewood, slowly turning into the tenderest veal this side of the Mediterranean. Beyond words, we enjoyed the company of men. The feast was outlandish to a few of us who never had head before. Arak and beer flowed in rivers and springs. Sandals taken off, shirts unbuttoned, belts unbuckled, stomachs filled and hearts warmed. Friendship, the everlasting kind was the bond that brought us together.

We will have an encore in a month or two. Some of us won’t be here. Others might arrive from distant lands and seas. We will find something unforgettable to do. Again!
Email ThisBlogThis!Share to TwitterShare to FacebookShare to Pinterest
at 2:19 PM

that sounds great Sa7ten and Hana

but remember what the Doc had told ya ;)

Thanx Soraya
I spent the day with very little food waiting for this "last supper".
Have a good time where you are:-)

You describe that so beautifully and vividly that I, as reader, have the distinct feeling of having been there, having smelled the most delicious smell of "the head", seen the steaming burghul ... and even gotten a nose full of the lovely anisy-smell of Arrack!

What you did NOT take into account is the fact this reader sits here with empty stomach, drooling for these delicacies ...

The kind of friendships you describe are unique in depth and "chemistry", rare - and most wonderful!

I am sure in two months - which will fly by - there will another surprise be lurking somewhere around a corner, as delicious as this one, with a company as fantastic and unforgettable as the one you shared "THE HEAD" with"! :)

WONDERFUL post Abufares .. as always, a sheer pleasure to read!!

Sounds like a very nice banquet!! But, where is the photo of THE head??
Abu Abdo

Wow, I love this post my man! This is one of the best I've ever read because it's written with such a personal touch that I felt as though I was almost there in attendance. I would've loved to join this feast...would've made a great recreation of the "Last Supper." I really do commend you on this post, Abufares. 10/10.

However, like the pure Italians say, when a chef makes a dish better than mama, the chef must be "whacked".

P.S.- When I first read the title, I laughed because I was expecting a different topic of discussion...

Karin
The only way for a reader to appreciate such a regular story is to have it written from the heart. These guys are my past, my present and my future. Despite, the negative aspects present in our and in every culture, having friends for life is the greatest gift of all. In our case, we might not have adequate pension plans, we might not possess the social institutional services so coveted in the west, but we have each other till the last days of our lives. To me at least, that's a great retirement outlook. More security than any bank can ever offer.

My dear Abu Abdo
I know that you would've enjoyed the company. I emphasized that my friend's passion is food. He couldn't care less about photography. I really feel a little unfortunate not to have had the chance to see the "head" which he described as "gorgeous". You and I should trust him on that one. Just imagine the beautiful head on a pack of a "La Vache qui Rit" pack of cheese :-)

Hello Rami
Indeed you would've love it. During the short period we had spent together I've noticed your love for the great oudoors around Tartous and for the food we eat here. Hopefully, there will always be a second time.

What a great HEAD!

I have never tried a Bull's head before. I feel that these things gives a sensation of manhood, especially with the Tartoussi mates. The next time would be lovely. You should try a big "Ferekh" of Fish with garlic and olive oil, or some barbequed Kebabs..

I desperately miss that food!

unbelievable writing, for a few minutes there, I lost track of the actual story and let myself enjoy how the words seem just perfect in the mouth.

brilliant... I can even smell the mountain right off ur post.

Just think of it this way. I can have head while you can take a train ride to the new Emirates Stadium, home of Arsenal, and actually watch a home game.
I will cook you 10 heads for an opportunity like that.
Don't blow it, even if it means watching ManUtd. Go for it!

Yazan
It always gives me great pleasure when you visit. No matter how good words are, they always fall short describing real friendship. The food is just a prop. Being with friends is what really matters.
Hope to meet you IRL one of these days.
Take care.

authentic as ever about fares.. damn it, you must be one of the very few that can have me read long posts until the end and still want more.. although i could never ever see myself eating anything's head... you made me wonder..

so.. I take it that you were a sailor before?

Man... you are the most eloquent tartousi i have ever met in my entire life... :)

sorry though, me and la7met ras don't get along.

Sa7tain and hope you had a great conclave

Hi Omar
I'm happy to hear from you again. We can change the main course, when you make it here one day.
As for being a sailor myself, no. A few of the guys present during the reunion are captains and chief officers on different vessels.
I stayed in the US among other places. I was there longest though, for 8 years. I went to college and later worked for a while before "setting sails" back home.
Thank you for dropping by.

Moryarti
Am I the only Tartoussi you've met, or are there more???
Just kidding...
We had a great time, and I really hope that one day, a whole bunch of us Bloggers can get together and have a go at it.
Thank you for your comment.

When I read the title, I did a double take!

I must say, I've never considered eating a head, but you made it all sound quite appetizing.

You know that having head is preferable to more people than eating an actual head.
It's appetizing and you can give it a try at some Greek restaurant in the US. They really know how to do it.
Thank you for dropping by.