Showing posts from August, 2006
Show all

I'll Fax You an Email on Perfumed Paper

- August 30, 2006
I only have to look back 12 years ( same age as a decent bottle of Scotch ) to remember that I used to send regular letters by “ air mail ” to my friends around the world. It took two to three weeks for a letter to travel from Syria to the US or Europe then. By the time I got a reply, a month would’ve elapsed. If I wrote more often to the same person, I and she would get confused and can’t quite figure out what the hell we’re talking about in any one particular letter. I used to wait for the damn 36 exp . film roll to finish before I could stick one or two pictures out of the bunch in the envelope. Sometimes a roll of film would linger in my camera for a couple of months if not more. There were people who even wrote on perfumed paper, although I didn’t do that for fear of being considered a fruitcake. It was romantic, so they say. Then came the fax machine, and everyone thought WOW, how ingenious! This was what millions have been waiting for, in business particularly. I was never r
9 comments
Read more 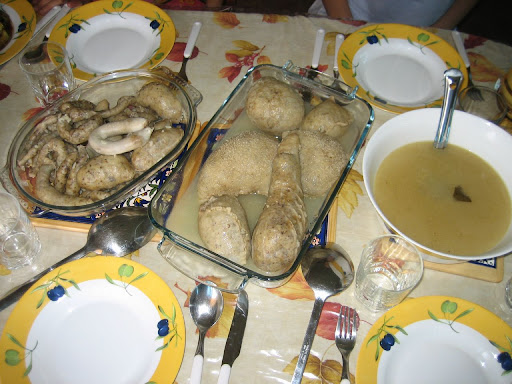 Although I was born in Tartous , I was raised on Damascene home cooking since my late mother was from Damascus . It has always been my personal opinion that their cooking is the best in Syria . I know that many would disagree and say Aleppo, Homs or Hama . Of course cooking and enjoying food is an absolutely subjective experience. So basically, there is no right and wrong. There is diversity and controversy which could only result in a better Syrian cuisine due to the silent competition that exists between the proud cooks of these great cities. But step aside all of you. In addition to obviously all types of seafood , there are certain plates, a very few indeed, which are best made by the Tartoussis . Even my mother, rest her soul, knew that it would be better to imitate the “locals” than to continue with her Chami ( Damascene ) way. One of these plates and certainly on the top of my culinary list is: Asheh (also known in other Syrian cities as Abawat, Fawaregh & Saja2at ). The
17 comments
Read more

Happy To Be On an Island in the Sun 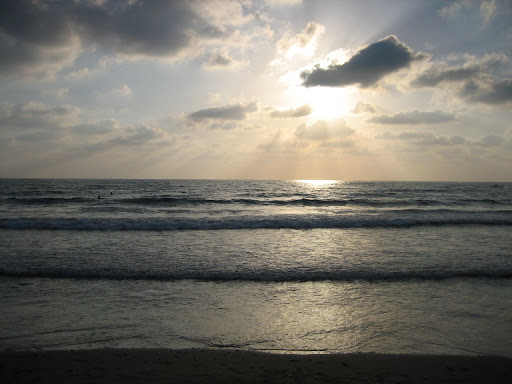 Summer is in full swing. Family and friends are home on holidays. Sunshine prevails every single hour of the day. The few shy clouds are mere props in the theater of the sky. The sea beckons to us all to enjoy the amity of each other and escape the heat of the day. Children and adults play together, splashing in water, enjoying the undulation of the sea after the passage of a lazy wave, magical instants preserved in time, burned forever in memory. I close the door of the air conditioned office behind me. It’s barely 2:00 PM and I’m the last to leave. I shed my shirt, throw it in the back, steer my car toward the highway leading to the beach. A primal instinct swells within, urging me to return to the sea, whence we came and forever long to return. I search for and find the old cassette tape I’ve played a hundred times. It’s the first song on Side B. I turn off the AC, roll down the windows and let the wind and the music unfetter my hair and spirit. Sitting in the sun waiting for a
12 comments
Read more 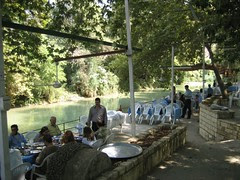 One of the oldest restaurants in the Tartous area is Nabe’e Hassan (نبع حسان = The Hassan Spring). It is beautifully situated on the River Markieh in the shade of giant eucalyptus trees. It has always been a favorite destination during the hot summer days for Tartoussis and visitors from Syrian cities. In the evening, the eerie green and red lighting emanating from the trees and reflecting on the surface of the water, the sounds of hundreds of frogs frolicking in the dark and the subdued rumors of the rushing little waterfall all conspire into making dinner a unique experience. Nabe’e Hassan would be a great place for a bunch of friends or a large family reunion to have lunch or dinner and perhaps get a little drunk. Since I am one who favors empty restaurants for such occasions, I would intentionally pick the dead days of the week for such a banquet. As other similar places in Tartous , Nabe’e Hassan will be in full mode and crowded on Thursday and Saturday evenings and all da
17 comments
Read more 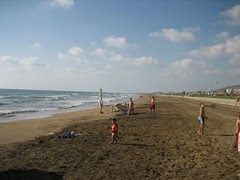 Not one of the most successful, but the most successful recreational project in Syria is al-Rimal al-Zahabieh (Golden Sands) of Tartous . This beachfront property has a shoreline of 2400 m and 1190 individual privately owned chalets. Opened in the early 1980’s as a tourist residential cooperative project, it has far exceeded the expectations of its founding fathers, the Syrian government and the thousands of visitors who enjoy its sands, sun and sea every year. http://static.flickr.com/36/218469107_e1adeba38c_o.jpg It all started when a group of Homsis (from Homs, Syria ) started this ambitious and pioneering project on a stretch of beautiful beach 15 km north of Tartous . It’s worthwhile mentioning that several other projects were started and completed at the same time, all located in the Tartous area. What makes the Tartous coastline unique, from Banias 30 km north to al-Arida (border with Lebanon ) 30 km south is the fact that it’s almost entirely a sandy stretch. The other p
9 comments
Read more

First you need to get yourself a wild rabbit. The only way I know of is to go for the hunt. The mountains around Tartous are filled with, among other creatures, wild rabbits and hares. We usually hunt them at night, preferably moonless nights. Four to five people go for the ride on the back dirt roads in a 4-wheel drive pickup truck. There will be the driver and a passenger to keep him company (so that the driver doesn’t fall asleep). The other two or three will ride in the back. The light bearer illuminates the sides of the roads with precise sweeping motions to detect and point to the game. The other(s) handle the shotgun(s) and the shooting. On a good summer night, a dozen or so rabbits could be bagged before daybreak. However, good hunters will always kill just enough to eat and not more. Be that as it may, here goes the 26th method of cooking a wild rabbit. It’s called “ Lapin à l’Abufares avec Burghul ”, after a great Tartoussi Chef by that name. ( Please close your lips togeth
9 comments
Read more

Football... According to a Tartoussi 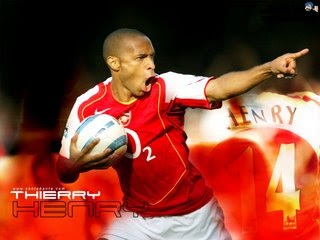 A month had passed since the end of the Germany Football World Cup 2006 . Although in terms of organization it was one of the best world cups ever, the play itself, the refereeing and the final game have left plenty to be desired. It is important that I state that I don’t care much about world cups. The only advantage I see in it is that it brings in new fans to the world most popular sport. I can speak about Syria only, but it might be true elsewhere, when I say that the world cup brings in women and children in large numbers. It also brings in shallow faddists who get terribly excited because it’s the in-thing to do once every four years. I have no national team to follow in the world cup, and I’m certain this affects my attitude. I can understand why people get excited over their national teams. Yet, I’m not fully certain that this is simply it. I love Italy like a second home. I love the food, the places, the language and the people. I am happy because they are happy. But in all
18 comments
Read more http://www.amrit-syria.com/Photo%20Albums/photos/P1030872.jpg My late friend Ali Al-Badri worked his lot of land in Amrit until he died in the winter of 2006. Over the years, I have been to his wooden shed by the sea on dozens of Fridays. I would arrive in the morning and usually return at noon. We would simply talk or take a stroll with a couple of pointer dogs amid the ruins of the ancient city, hunting for quails. Amrit is a magical place. Neglect had a two-sided effect on her. First, it had deprived her the fame she certainly deserved as one of the most important Phoenician archeological sites in the Mediterranean basin. But, in a strange sort of way, it had preserved her from further damage which could have been inflicted if the archaic mentality of the Ministry of Culture and its Department of Antiquity have had a free hand to reign. When I go for a saunter in the midst of ruins dating back to the third millennium BC, I often find sheep grazing the overgrown grass leisu
11 comments
Read more 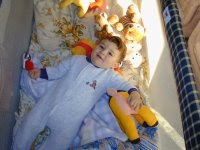 I’m in the summer of my life. I find myself with plenty to consider. As I look back to the deeds I’ve done, to the dreams left unfulfilled, I feel some urgency. I haven’t carried out half of the stuff I thought I’d have accomplished by now. I have seen my road forks countless times in my past. I have followed so many dead ends. I have made more of my share of wrong choices. But here I am, and to my own surprise, a happy and content man. Bringing up kids is like taking drugs or having too much to drink. They give you a headache but they fill your life with joy and fantasy. They also tend to make you forget a little about the present. Time sure flies with them around. I would’ve been on a different path in life hasn’t it been for them. One that could’ve been more exciting perhaps but nowhere near as gratifying. So I gave up some and took a lot in return. I’m not a free person anymore. I could never follow up on an instant urge, pack my stuff and just go in search of another campground,
14 comments
Read more 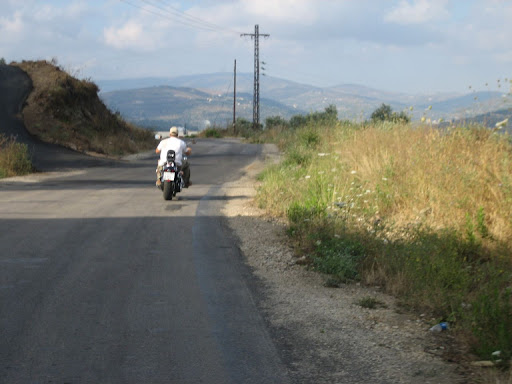 The path to our destination is not always a straight one. We go down the wrong road, we get lost, we turn back. Maybe it doesn't matter which road we embark on. Maybe what matters is that we embark. Barbara Hall, Northern Exposure, Rosebud, 1993 When I get in the saddle of my bike, this is exactly how I feel. My two biker friends gave me the honor of picking the destination on a hot Friday afternoon. We were in the mood for a long and tough ride. We had all the necessary gear, three full tanks of gas and 9 or 10 50cl Swingtop bottles of Grolsch Beer completely cradled in a pack of ice. Let’s go to Husn Suleiman I yelled over the asynchronous dins of the three engines. It was going to be one hell of a ride to the temple of Zeus himself. http://static.flickr.com/49/184768172_a006722c60_o.jpg We hit the road around 5:00PM to reach Husn Suleiman (53 km to the east of Tartous ) in a little bit over an hour. There’s nothing exciting to write home about in riding from Tartous t
7 comments
Read more

Lebanon Under Siege: Official Website for Relief in Lebanon

- August 01, 2006
Thousands of injured and displaced people from all over Lebanon need your help. Lebanon needs you! Please donate money, relief goods or your time and expertise. To donate, or to obtain information on relief efforts in Lebanon go to: Lebanonundersiege.gov.lb The official website for relief in Lebanon
2 comments
Read more
More posts