The museum of Tartous is bounded on its eastern side by a large garden of over 2000 square meters. I’ve checked with some of the city’s elderly and was told that as far as their memory served this area has always been a Café in a garden and it has always been called Al-Menshieh. The cadastral plan prepared by the French during their occupation of Syria in the 1920’s illustrates the presence of several trees (they are still there) and a garden. I have found an old b&w photo of the Menshieh dating to the mid 1940’s and it shows that even then it was used as a Café. 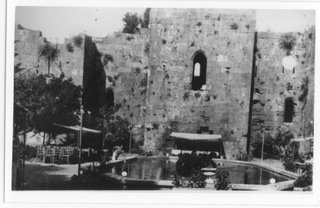 The Menshieh is owned by the City of Tartous (Al-Baladieh). Several entrepreneurs have rented and invested in the place from the 1940’s until 1983. Then, in their infinite wisdom and for some totally ridiculous reason, the Department of Antiquity and the City of Tartous conspired and closed it down. The Menshieh remained closed for 20 years and fell victim to neglect and idiocy. The Tartoussis were furious but who gives a shit.

Against the odds, a returning expatriate won a contract with the city and invested heavily in rehabilitating the premises. They tried to suffocate him with endless administrative red tape and crazy rules and regulations, but he stubbornly persisted. His triumph in the end was an event hailed by Tartoussis. Life has returned to the heart of the city. The Menshieh was reopened in 2003. 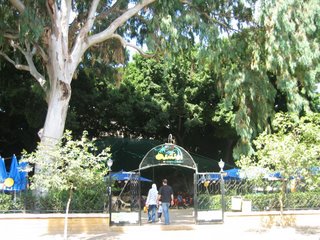 As a Café, Al-Menshieh is huge. It has more than 170 regular tables. On weekends and holidays, many more tables are brought in to accommodate the extra demand. Mainly due to its perfect location in the center of the city and also because of the beautiful surroundings, it has become one of the top recreational places for people, young and old alike. In the winter, it is shielded from the cold and wet westerly winds by the museum. In summertime, it is shaded from the heat by the giant eucalyptus and ficus trees. Although the Menshieh has two indoor structures, the preferred place to sit is outside.

Once you walk in the main gate from the east, you immediately sense the special and unique Tartoussi atmosphere. To your left is an elevated section, almost always reserved for women who come alone or in small groups to enjoy an arghile. I’m not talking about traditionally clothed women, au contraire, they are the closest thing Tartous has to “Desperate Housewives”. They come to the Menshieh dressed for the kill, so it seems. The regular middle-aged men who frequent the Menshieh every evening sit on the right side (north) of the main gate also on an elevated section. From there, they have a commanding view of who’s getting in and who’s going out, a moment of utmost importance for all the women, young and not so young to show their stuff. 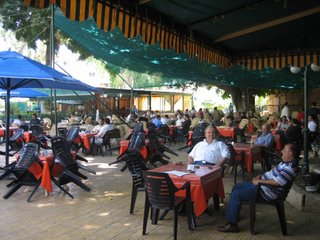 On the far south end of the Café is a secluded and open large space taken normally by chastely dressed women and/or those with kids. The families, meaning a father, a mother and children prefer to head toward the northwestern part of this large garden and take a table there. Those who come mainly to eat will find their comfortable place in the small joint to the left of the entrance. Although food is served outdoors, inside you will have the feeling that you are in an intimate place. The diehard card players (they play Morto in Tartous) would head straight to the right and enter a green glassed-in structure. This is where the ambiance of a real Tartoussi Café is felt with a twist. There’s a pool table for those who still refuse to go home although it’s past midnight. 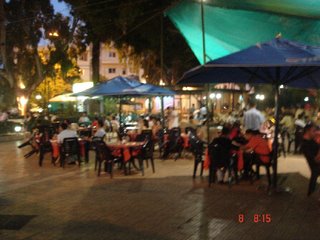 Right in front of the main gate, there is a large pond of water. It is surrounded by tables on all sides, and this is where the young (and the out-of-touch-with-reality middle-aged sit). Indeed, this is the heart of the place, this is where all the action is. The Menshieh is mainly a haven for the young beauty queens who settle between the giant trees in flocks. Therefore it’s also the ideal hanging place for the young men with the abnormally high hormonal levels. This section is most likely the source and the target of all the lewd Bluetooth messages flying around between the trees.

If you’re from Tartous, you already know all of the above. The Menshieh has long been considered as an established social institution. If you’re new in town, or in for a short visit, give it a try. During the day, it’s a very nice place to settle with a newspaper or to grab something to eat. In the evenings and even if you don’t like crowds, there ought to be some secluded table that will suit you. If you go there on weekends, don’t ask for solitude though, the Menshieh is a place to socialize, the Tartoussi way.
Email ThisBlogThis!Share to TwitterShare to FacebookShare to Pinterest
at 11:05 AM

I want to thank you for the wonderful image you are promoting of your hometown of Tartous. I an half Syrian on my mother's side. She's actually from the Tartous area. I have been there last summer and even had the chance to spend an evening at Almenshieh. Your depiction of the general atmosphere is so close to reality. I think you are doing a very good job as a fully fledged advertising campaign to your city. Many of the Syrian blogs I follow are doing a much better job than the official Syrian sites.
Keep up the good work.

Thank you for the positive feedback. I do feel an obligation to promote my city, that's true. Although I don't like the way Tartous has developed, I still hope or "dream" that things can be set to right again. Unfortunately, there's no way to go back in time and make Tartous a small and charming city. The least we can do is to regulate the growth and modernize the infrastructure, rules, regulations and finally and most importantly the way people think and behave

when i'll go to Tartous i'll sure give it a visit :)

when you come to tartous, you'd better give me a visit:-)

I'm all for foreign investment in Syria. While it's not really foreign in the case of Menshieh, I think it was a really positive move.

Sure thing Omar
You should see the before and after photos taken of the place. If there's anything that is the antonym of a tornado, that would be it.

Although I am a real Tartoussi, but I only visited the Manshieh for two or three times. What I hate about it is, like almost all cafes in Syria, it is usually so crowded that you can't find a place where you can breathe clean air.

For God's sake, almost all countries in the world have a place reserved for smokers, while we don't have even a tiny little space for non-smokers.

I believe it is my sacred right to breathe clean air. That's why I don't like going to places which deprives me of that right, Even if it was a charming place like AlManshieh...

I have to agree with you. Separate seating for non-smokers should be available in all public places.

Thank you for these picssss
I live in france and really miss syria cause once a year is not enaugh !!!
keep puting photos !!

Hello Faroojjjj
I'm glad you like the pics. Sorry for not replying to your comment sooner but I've been away for the last week.
Thank you for dropping by.

I come originally from Safita, but Tartous plays one significant role in my life as well.

Growing up my dad, aunts and uncles, and my grandma would spend days on ends telling us stories about Al Menshieh. Of course back then it was still closed.

In 2003 when it re-opened I was lucky enough to be in Syria during that summer. My cousin and I went there around dusk. It was the greatest atmosphere of all.

You know when you hear stories about a place and you start to picture it in your mind's eye?! Well, Al Menshieh was not even close to that image. It is truly fascinating.

And I have to tell you, just reading the word "Morto" brought me close to tears. I haven't played that game in ages. Like I always say, it's the little things in life :)

Hi Kinan
When you're in this neck of the wood again, you should let me know.
The Menshieh of Tartous is one of the oldest social institutions. Everybody has one or memory in the shades of its giant trees.
As for Morto, all of my friends are fanatic players, except me. I can never concentrate long enough to play any card game. My unlucky partner would rather kill me than act as my partner one more time.

Hi!
You have a nice website. How are you doing?

We would like to invite you to visit our new dating service.
And it is really different from others.

Just IMAGING you could know if your new dating partner likes you or not BEFORE contacting him/her...
So at the moment when you decide to send the first message - you already know one's attitude to you!

Read more on our blog: livedatesearch.blogspot.com