Traveling at the Speed of Light 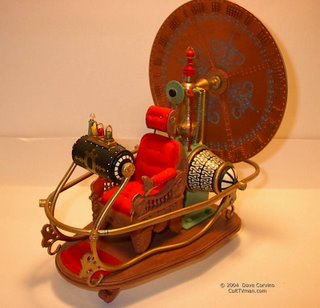 Ten years ago, I tipped the scale at exactly 75 kg (165 lbs). Going even further, say 20 years back, I was a lithe young man of 65 kg (143 lbs). So I figure, as I’m trudging along this one way street, that I roughly gain 1 K a year. What I’m adding in weight, I’m obviously losing in hair and sheer good looks. As if it weren’t enough, gravity evidently is conspiring against me. What used to be my chest in the eighties is slipping toward my navel. There’s almost nothing up there in terms of attractive contours to show (or feel) anymore. No sculptured biceps are to be offered to hold on tight to a beautiful girl in distress. In short, I truly believe that a lady has to fall in for my brains now that the looks are all but gone.
I’ve read somewhere that in another century the average life expectancy would exceed 120 years. For now, and assuming that I’d live to be 80, I’m definitely middle-aged. I look back at what I’ve done over the years. Quite a lot or nothing at all, is purely relative and a matter of perspective. Speaking of relativity, theory has it that if I can go at or near the speed of light, I would age much slower than ordinary mortals. Apparently if I had the means, I would go for a 5-minute spin on a hotrod and return 10 or 20 years later by the clock of Big Ben. I would then play Don Juan with all the young women who keep telling me that I’m too old for them now. That would’ve been nice, avenging my slipping youth! Still, even in the wildest of science fiction scenarios, going back through time is sort of tough to swallow. We’re sure riding through a one-way street and it doesn’t look like that there’s any opportunity for a U-turn. I would say that I’m on the crest of my road at the moment. It will all go downhill from here. Now, this shouldn’t in anyway be interpreted as inherent pessimism. All joyrides take advantage of the downhill factor in providing the fun that thrill-seekers are after. However, the waiting, the climbing and the anticipation of the impending fall is gone after you cross the middle marker.
The fall has begun, slowly at first but with steady acceleration. Sure, sure, there’s plenty to do yet. Eventually though, it’s going to be Bingo Night instead of a night of banging. Let’s look at it this way; if we’re lucky we’ll grow old with those we love. There’s no blessing greater than that.

Anonymous said…
lol
I don't know how you come up with crazy stuff like that. You sure make me laugh. I've been enjoying your blog for sometime. In some strange way, I can identify myself with your writing.
6:05 AM

Syrianita said…
ain’t we all going down this road!?
Someone said : Youth is a religion from which one always ends up being converted.

Abufares said…
Soraya
As long as we're young at heart, nothing else matters. Well, not really but I guess we ought to say things like that to feel better about it, cheers to U :-)
9:56 AM

Anonymous said…
"Eventually though, it’s going to be Bingo Night instead of a night of banging."

Honestly Abu fares. What did you have to drink or smoke to come up with this phrase. I keep reading it and it gets funnier everytime.
Thanks for the good read.
10:37 AM

Abufares said…
I had a couple of beers that's it, I promise.
Thanks for reading.
3:08 PM

Anonymous said…
Getting Older is obligatory, Getting Wiser is optional....
4:03 PM

Anonymous said…
You really remind me of Frank Sinatra, When I was seventeen, It was a very good year

Abufares said…
Thank you Madsurg for pointing out and reminding me of this great song.
3:22 AM