A Brief History of Tartous 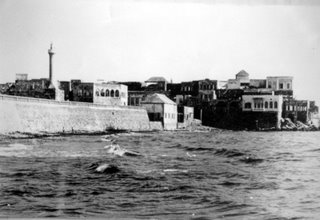 That being out of the way, let me tell you what I know about Tartous.
Tartous was founded by the Phoenicians as an agricultural satellite to the more important settlement then, the island of Aradus (Arwad). Thus, it came about during the Roman era that the original name of Tartous reflected this secondary role “Anti-Aradus”, meaning the town facing Aradus. Anti-Aradus has morphed over the years to Antaradus to Tortosa then eventually to Tartous (Tartus). At a certain time (346 AD) the city was named Constantia after Constantine who favored its Christian inhabitants over the pagans of the island. A temple in honor of the Virgin Mary was built in the city in the third century. It is believed that this temple is one of the earliest in the world honoring the Virgin. Some Christian historians even claim that St. Peter himself consecrated a church in the same location where the museum of Tartous stands today. This magnificent building was constructed in 1123 by the Crusaders who named it the “Cathedral of Our Lady of Tortosa”. 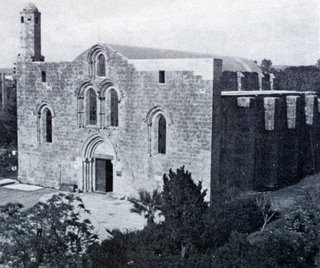 Romans, Arabs, Byzantines, Fatimids, Crusaders, Ottomans and the French played yoyo with Tartous over the course of centuries and it passed from one hand to the next, witnessing and absorbing the different cultures, true to its heritage as a city by the sea. From the Arab conquest in the 630’s on toward the final day of the presence of the crusaders in the East on 14 August 1291, Tartous was governed by, among many others, the Byzantine emperor Nicephorus II Phocas, the Fatimid Caliph Aziz, the Emir of Tripoli, the Count of Toulouse Raymond de Saint Gilles, King Baldwin IV, Nur al-Din, Saladin and Sultan Qalaun. Indeed, the last exit of the Crusaders from the east was through Tartous when the Knights Templar escaped silently to Arwad where they remained until 1303 until they ultimately withdrew to Cyprus. 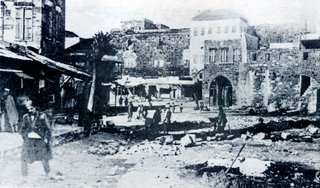 Today, the old city of Tartous remains an historical treasure. It is one of the least credited sites in Syria and acknowledged mostly by western scholars, architects and historians specializing in Mediterranean cities. Known to locals as the “Saha: الساحة “, the old city is a typical example of a military garrison of Crusader architecture. It is surrounded on three sides (North, East and South) by a wide ditch, an outer wall, another ditch (Al-Khandaq) then an inner wall. The sea reaches the feet of the outer and only wall on the west and makes the city totally closed in. The outer ditch was the first line of defense and it would be filled with sea water when the possibility of an attack was sensed. Within the walls, the crusaders built a huge banqueting hall (Salle des Chevaliers), a chapel and a dungeon. The cathedral was built nearby, a couple of hundred meters toward the south on a hill in what had been known as the Episcopal city. In addition to the Crusaders (the Templars as they were known), the local inhabitants, the real Tartoussis also lived within the confines of these walls. The site was transformed by the Crusaders to become a bastion and a citadel, but it was a city nevertheless. The crusaders had long since left when the Ottomans then the French occupied Syria. Both had left their conspicuous marks on Tartous by adding on its Phoenician, Roman, Byzantine, Arab and Crusader heritage. 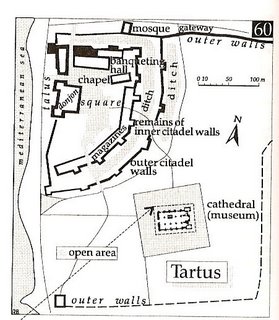 The structures and buildings of the old Saha look like a multilayered cake where the expert eye could quickly catch the successive architectural trends juxtaposed one on top of the other. The most important fact is that the people remained and Tartous has always been inhabited. The sad truth, however, is that neglect, abuse and ignorance through the years by both the local population and the government have distorted the place into a decaying dump.
All the native families of Tartous descent directly from this place. People of my generation vaguely remember their grandparents’ home within the walls of the city. Those who remained did so because they had no alternative. Like a used piece of clothing, the old city of Tartous has been passing from one socioeconomic group to another. The concentric urban expansion trend of the west toward the suburbs has taken a freak twist in Tartous and other cities in Syria and the third world. With the absence of a proper urban planning model, the expansion is more canceric in appearance and consequences. Tartous which was once a beautiful and charming city became almost Tartarus (in Greek mythology, the lowest region of the underworld).
For an intelligent observer, traces of bygone beauty are still to be seen here and there. The discerning eye, even in the absence of reminiscence, can still attest to the splendor of past days. For many, myself included, who helplessly watched their city being maimed in vain, can only hold on to memories and the spirit of a possible resurrection, one coming day.

For further information about the history of Tartous and all other Syrian sites, I suggest “Monuments of Syria An Historical Guide” by Ross Burns, I.B. Tauris – Dummar Publisher, 1999.
The three black and white pictures above come from an old collection saved by the late photographer Zanco of Tartous.
The diagram of Tartus: Monuments of Syria (third edition) by Ross Burns, I.B. Tauris - Dummar Publisher, 1999, p.230
P.S. I will post many of my pictures in the time to come of the old city of Tartous.
cities history Tartous

George Ajjan said…
Thanks AbuFares, this was informative and enjoyable to read.
12:40 PM

Anonymous said…
when i read u i feel less lonely and more syrian(in the cultural meaning of the word)thank you compatriot
6:54 PM

Abufares said…
Nothing makes me happier than hearing something like this. Thank YOU for reading my blog.
3:14 AM

Abufares said…
Thanx AMR, great to hear that you like it.
3:16 AM

Unknown said…
Thanks for the valuable information. With the Tartousi part of me, I know much of what you mentioned, but I really enjoyed reading this piece of history till the end. :)
12:07 PM

Abufares said…
thanks for your feedback.
Glad you've enjoyed it.
12:15 PM

Anonymous said…
interesting blog! what can u say about this quote about Tartous "In Roman times, it became a vital military base providing a supply and landing seaport, remains of which are still visible." Does it means that the remains of an old roman built port is still visible?

Abufares said…
Hi Andrew
It's nice to find out that someone actually read this post after all this time.
The remains of the Roman port were visible to all up until the mid 1960's. Only a very small part can still be seen above ground since the entire area was land filled. It's located inside the Tartous Port in close proximity to the main gate and off to the west. Administrative buildings were erected on the site.
I have an old B&W picture (1950) of the Roman ruins. I will gladly send it to you by email.
Write to me: abufares at bigfoot dot com

i found your blog when searching for my grandparents born city (who came to Brazil circa 1905)...
Well, the only thing that i know is this (my mother says) ...Tartous is the city where they lived until 20 and some...After, they immigrate to Brazil...and nothing more we know...it´s a pity...but, i know..in my(and my mother and my sister) veins, some Tartoussi blood runs...

Regards...thank you for some information...

Abufares said…
HI Germinaro
You're welcome. Now that you've learned a little about Tartous you should make a visit one of these days. You won't be disappointed. The people are even more marvelous thatn the place. Thank you for dropping by.
6:45 AM

Unknown said…
Hi Abufares Tartoussi, it was such a pleasure reading your blog, my sister and Syrian friend Nidal and I, came across this by accident. You're such a character and we'd like to here more from you. Keep up the good work!
10:00 AM

Abufares said…
@Rima
100 Ahlan wa Sahlan bi Rima wa Nidal.
I'm honored and flattered by your words.
If you keep coming I will keep the good work :-)
10:31 AM

Unknown said…
Dear Abufares,
I came across this page and read your article by accident ....It's my pleasure seeing your mark everywhere, so proud that I know you.....
Maya
1:25 PM

Abufares said…
Hello Maya, Kifek? :-)
It's such a pleasure to see you here. I wrote this post many years ago and the fact that you found it by chance fills me with immense happiness. Please write when you get a chance. You have my email and I'd love to hear from you.
4:16 PM

Unknown said…
Dear AbuFares,
Have u translate this lovely article to Arabic?
Most of my friends asked me to translate it, But I prefer to ask u first..
Be well