A Tribute to Ali Al-Badri 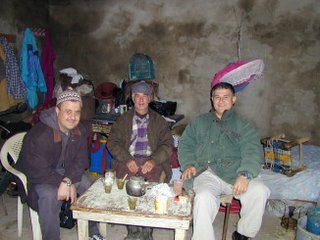 Ali Al Badri is in his mid sixties. He wakes up with the daily resurrection of the sun and sleeps an hour or two after it dies. He works on his 5-acre piece of land, 7 km south of the city. There, he has a small dilapidated shed with a tin roof. An olden army cot occupies one corner. A weathered handmade table and an odd assortment of wooden crates make up for the rest of the furnishing. Sharing one wall with the shed is a smaller lean-to where his animals live. Three or four dogs, along with a mule and some chickens, are the residents of this place and the companions of Ali. Even in the winter, when there's little he could do in the land, he sticks by his daily regimen. He kick-starts the cold 50cc engine of his puny bike to life, dons himself in a yellow mariner cloak and rides off in the drizzle and rain to his land by the sea. Over the course of fifty-two years, hot or cold, wet or dry, sick or fit, he had never missed but a few days. There was this time when his mother died late one summer night. He had to stay in town and attend the burial. He rode to his realm from the gates of the cemetery. His brothers would receive the mourners for three days. He has eight mouths to feed, and not his dead mother or all the kindly angels would do anything to help with the chores of the earth if he stayed behind. When his older son left for the army, he had to visit him one Friday. The bus trip took the best of five hours and he had to change vehicles a couple of times. When he finally made it to camp, he gave his son the contents of the straw basket; some sweets baked by mother, fresh country eggs and homemade bread. Three quarters of an hour later, Ali got up, fished a 500-pound bill from his pocket, stuck it in the kid’s hand, hugged him briefly and said goodbye. He made it too late into town to ride to his lot. So he slept with a feeling of remorse and concern for the animals and for the land. When there’s work to be done, he labors for hours on end. He plows the earth with the aid of the mule. He plants, irrigates and takes the weeds out with his bare hands. Then by mid-afternoon, he sits down on a crate or a nearby stump and rolls a cigarette. Over a cup of tea or matte, he listens to the BBC radio. This is the best time to visit with him and get some insights on the world of politics. The motives of America are stripped naked by his guiltless mind. The actions of the pawns and puppets are revealed and explained with fluidity and raw logic. If it were a particularly good day for him, he might offer his visitor a glass of Arak. If alone, he would shoulder his shotgun and go after a few quails. The dogs and their fleas would be terribly excited by then and would be jumping all over the place. The wind blows and the air reeks of primitive smells and the land by the sea is colored by allusions. Ali is a man who’s scratching life with dirty fingernails. He’s a poor man, but a content man and a happy one. He never had any formal education nor traveled abroad. He knows all there is to know. He does what needs to be done. Although he had never read a newspaper or anything else for that matter, Ali was a man of the world, his own world.
Ali Al-Badri passed away in March 0f this year, the land by the sea has lost him forever.
personal

Trabilsi Downunder! said…
May God have mercy on his soul!
3:28 AM


btw, I have relatives in tartous, if u know the Melhem family?? Faisal and Jamal Melhem??? they're great friends too...
7:19 AM