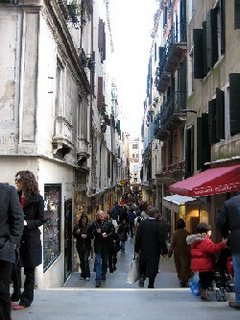 My earliest stroll in Venice would be forever remembered. It was back in January 2000 on my first Italian job. I’ve been there many times since, but always look back fondly at that particular trip. My host, Franco, invited me to a superb seafood lunch which lasted more than a couple of hours. We had all kinds of fruits from the sea, cooked and uncooked in every conceivable Italian way. We consumed quite a bit of wine, and to top it off plunged into a hot dip comprised of olive oil and peppers of exotic origins and tastes. So, on we walked through the alleys of Venice, my host guiding me in the midst of the timeless city until we reached St. Marco, the main plaza where all the magic of the city emanates. Right in the middle of my rapture with the beautiful surroundings, I had to go. What I mean is that I had to go to the bathroom immediately. My host, too, looked uncomfortable, queasy and pale. It turned out that he had to GO as well. We started on a frantic run to the car, at least a couple of miles away. It’s unimaginably hard to sprint the narrow wet streets of Venice when you’re cold, and especially if you had to go. We made it in one piece (each) to the car and Franco really drove like a maniac in the drizzle, ignoring speed limit, courtesy to other drivers and all basic safety rules. We finally reached the offices of Franco’s company in downtown Mestre (the land part of Venice). There was no place to park! He double-parked and started running with me close behind on his heels. We blasted through the building and each occupied a VIP restroom. What a relief! I stayed long, real long. When I finally came out, I found that Franco was still in there. He came out a few minutes later looking jovial and self-possessed.
“Whateh youh likeh fore dinner”, he asked, “Pasta ore a special estake that ise the beste in the world”.
I really like Italians.
cities travel

Abufares said…
I'm glad you agree with me, may be we have more in common than the urgent need to go :-)
2:20 AM

Unknown said…
that's hilarious.. I can picture you guys in the car and then running to the washrooms..

Let's just say I have had many such experiences. And is it just me or do you also feel like you can't hold it anymore as soon as you have a toilet in sight? It's as if your body just says "your close enough, now you're on your own"
12:48 AM

Abufares said…
Hi Omar
I'm glad you've found this early one after all this time.
The sight of the nearby toilet triggers neurons in the brain, which in turn pulls on a nerve connected to the lower back where a chemical is immediately released acting as a muscle relaxant. The ass is dilated and... you'd better have your pants down by then.
2:33 AM

KJ said…
I recently had such an experience... unfortunately the bathrooms were occupied and it was not a good day to be wearing my tanga.
5:59 PM

Abufares said…
I'm sorry to have to say it so bluntly KJ, but:
Shit happens!
4:08 AM

That was truly the funniest thing I've read in ages!! So glad I went back to the archives!
11:49 PM

Abufares said…
@Fenella
I'm also glad you found this one. I LMAO just reminiscing. You also put a huge smile on my face just imagining you reading this before going to bed :-)
1:20 AM