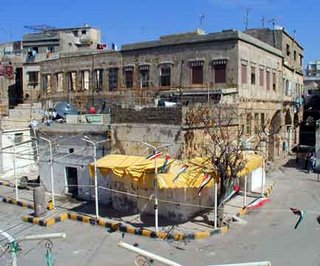 We’re swept away with the pace of modern life. We strive to follow up with the lead established by others, ignoring who we really are and were we came from. Such is the case with those known to fall under the biased Western word “the Third World”. If there ever was a First World, then we’re definitely “It”. But alas, money talks nowadays, and when the vast majority of people are familiar with Hollywood and Burger King, a very small minority have ever heard of the ancient cities of Ur and Ebla, let alone Tartous.
Circumstances placed me a few years back in the middle of a restoration project in the old city of Tartous. A Spanish team formed by architects and urban planners from the cities of Palma de Mallorca and Alicante paid a visit to Tartous. They wanted to take part in the restoration of one particular building, technically labeled “Block J”. A few days before their arrival, I had started a complete survey of the complex structure and had transformed my data into a 3D model in order to be able to generate all kinds of maps and a full rendering. During my work, I had learned a little about Block J, the part of it that’s above the ground anyway. It seems that this one structure was compiled during different epochs and is more like a 3 dimensional jigsaw puzzle. Just barely above street level the block is a mixed array of Byzantine and early Islamic architecture. In other words the foundations and the caves underneath the block date back to as early as 330 AD. Level one was completed and fortified by the Crusaders during their march to the “holy land “. The second level dates back to the Ottoman Empire over which the French added yet another plane during their occupation of Syria. Scattered around it and protruding from here and there are annexes built by the inhabitants of Block J and their descendents over the course of the building’s colorful history. The most amazing aspect about Block J is the fact that it has been inhabited continuously. Today, more than 40 families dwell within the walls of the block. How many deaths have these windows witnessed, how many births! The howls of slain soldiers dying far away from home and the whimpers of ancient tormented Tartousians still echo against the historic walls.
I had passed by this structure hundreds of times since early childhood. I had never gaving it a second look until I learned what I’ve just told you. Today, we’re in need of understanding our roots in this ever-changing world. With the globalization of a generic culture brought about by fast and cheap communications, we’re at risk of forgetting all about our origins. More kids in this part of the world now are familiar with Ronald McDonald than with Salah El-Din. Our cultural demise was brought about by our own hands. As we witness in fascination the giant steps the advanced countries of the world are taking, it’s only fair to remember that we had been there once upon a time. That was not meant to make us feel any better about the present state of affairs; it’s just a humble note that might go unheard in the loud Rap concert (Real Rock’n’Roll already gone) playing right now all around us. This too will be no more, one coming day.
history Tartous

Unknown said…
I completely agree with you.

While I was back in Syria this summer someone casually mentioned that "furun abu fo2ad" is built on top of Roman ruins. Apparently, while digging to pour the foundation of the bakery, the construction men noticed an ancient structure. Upon closer, and I assume, professionals inspection, it turned out that the ruins were an old Roman well. I took great pride in living 2 minutes away from a place that has seen thousands of years of history.

Ironically enough, many of my Canadian friends dislike the lack of culture and history that Canada has, and often dream of visiting Europe to experience those things that they're missing.
6:25 PM

Abufares said…
Hi Omar
So nice of you to read this "ancient" post.
Syria is full of treasures. The burried ones are even more fascinating than the ones we've already unearthed.
I hope that we would be able to really bring into focus the magnitude of the civilazations that made Syria their home over hte centuries.
3:16 AM